The Productivity Commission is holding an inquiry into the national evidence base for school and early childhood education.

An issues paper is now available (click here to get it), and submissions are open until 25th May 2016. So you’ve got plenty of time to write a submission. But is it worth writing one? Will this inquiry ultimately lead to more evidence-based practice in education? Or will its recommendations be ignored?

The 2005 National Inquiry into the Teaching of Literacy examined the evidence on the teaching of literacy. You can read all about its findings, which are yet to be widely implemented, here.

Former Parliamentary Secretary for Disabilities and Children’s Services Bill Shorten, now the Opposition Leader, also commissioned a report on how to help people with dyslexia, and another comprehensive report can be found here. Its recommendations still haven’t been implemented either.

In 2014 there was also a Teacher Education Ministerial Advisory Group report called Action Now: Classroom-Ready Teachers which said (among other things) that teachers need to be better equipped to teach reading. How well this is being implemented is difficult to know.

There was even an inquiry into learning difficulties in children and adults as far back as 1976, when I was still in primary school, which has this to say re teacher preparation:

Our current system lets down teachers as badly as students. Many pre-service teachers have literacy difficulties, for which they will be tested from next year (click here for a previous blog post about this), and many current teachers don’t know enough about basic linguistics and aren’t confident in teaching literacy (click here for some recent research on this).

Inquiries are only interesting if they help improve things.

The previous inquiries have already made it clear what needs to happen to ensure more Australians can read and write than at present.

Here’s an idea. Implement the findings.

In my wild erratic fancy visions come to me of hundreds of people writing single-sentence submissions to the Productivity Commission saying, “Please implement the recommendations of the 2005 National Inquiry into the Teaching of Literacy, the 2010 report ‘Helping People with Dyslexia: A national action agenda report’ and the ‘Action Now: Classroom-Ready Teachers report'”.

Universities funded by taxpayers should be teaching evidence-based practice, and Education faculties should not be allowed to teach literacy-teaching practices which are not consistent with the best evidence available. Likewise, taxpayer-funded education departments should recognise that teaching all five-year-olds to read and spell (not just 80% of them) is complex and difficult, and not weigh teachers down with a whole lot of other less-vital expectations. 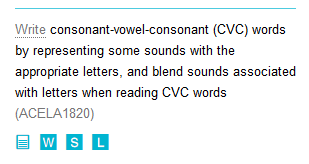 To my mind, the most important reading/writing standard in the current Australian curriculum for school beginners is: ACELA 1820 “Write consonant-vowel-consonant (CVC) words by representing some sounds with the appropriate letters, and blend sounds associated with letters when reading CVC words”.

It’s right at the bottom of a whole page of other English standards for the Foundation year, like an afterthought. It’s also highly imprecise. Does “C” represent a consonant sound or a consonant letter? What about “V”? Which sound-letter correspondences are to be learnt in the Foundation year? At what percentage accuracy will children read and spell words?

Sigh. Move and tighten it up! Give teachers enough training, resources and breathing space to ensure at least 95% of children achieve it in their first year of school! Sorry, I’m shouting again. But it really does make me cross enough to shout.

4 thoughts on “How many inquiries into literacy education do we need?”