Late last year we made some videos with the help of a couple of amazing kids. Heroic Harrison, then aged four, has already starred in a couple of blog posts about early literacy apps and Embedded Picture Mnemonics.

His sister Amazing Amelie, then aged seven, here helps me demonstrate an approach I use to teach about vowel spellings with the Spelfabet moveable alphabet. Sorry it’s taken me so long to put this video up, was already snowed under before we had to switch to online therapy.

You don’t have to use my download-and-print moveable alphabet for this activity if you have a similar one, including an online one, or prefer to make your own. You can also devise your own teaching sequences, or try my Level 3 sequences. If getting anything from my shop before 30 June 2020, don’t forget to use the COVID-19 coupon code to get 30% off.

Thanks to Amelie for her amazing help, and to Caitlin Stephenson for organising this.

We have a new set of download-and-print decks of phonics playing cards, this time targeting more advanced spelling patterns. The cards are still child-sized (5 X 6.5cm) with words facing both up and down, making them easy to read from either side of a table.

END_OF_DOCUMENT_TOKEN_TO_BE_REPLACED

I’ve just written 30 pages of new word sequences/word chains for learners to build using my moveable alphabet. These cover the sound-spelling relationships that lend themselves to this type of word-building from my Workbook 3.

They cost $1.40 now everything in the Spelfabet shop is 30% off (use the COVID-19 coupon code. Sorry I can’t make everything free).

Sequences/word chains like these build phonemic awareness and sound-spelling knowledge, and are especially useful with kids who find handwriting difficult. They are hard to make up on the fly without tripping over words that don’t follow the pattern you’re trying to target.

First you make a word using the moveable alphabet, read it aloud, and then ask your learner to change it into a different word. They must consider the identity, order and number of sounds in the words, work out how and where the words differ, and make the relevant spelling change.

Having ready-made sequences allows you to present this activity at a fast pace, get through a lot of words in a short time, and not inadvertently confuse anyone with too many patterns at once.

Many of the readers of this blog probably already use the earlier, free sequences, so these ones probably don’t need lots of further explanation. I’ll just put a snippet here of what they look like, to give you the idea: 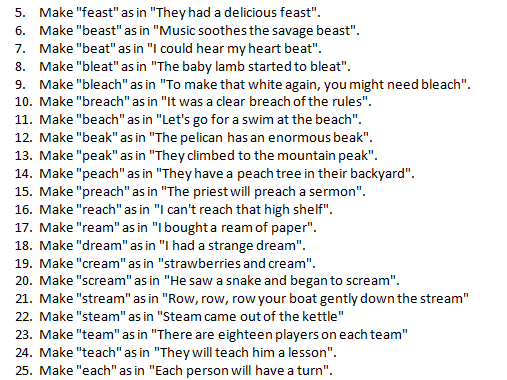 These sequences took me absolutely ages to make, so I hope you like them, and please send me any feedback you have on them. Stay well!

I’ve had many requests for a flashcard-sized version of our Embedded Picture Mnemonics, so (finally, sorry, I was moving house) here they are.

Embedded picture mnemonics are drawings of letters embedded in a picture of something with a name that contains that sound. The classic example is a snake in the shape of a letter S. 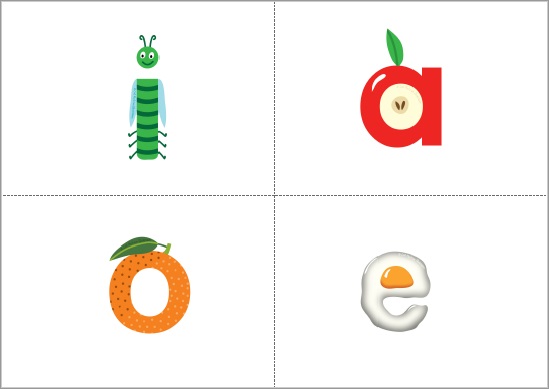 Mentally linking two abstract concepts (a speech sound and its letter/spelling) to the point where one automatically evokes the other is hard work, and typically requires hundreds of repetitions. END_OF_DOCUMENT_TOKEN_TO_BE_REPLACED

Most young children are already using apps on phones or tablets, at least occasionally. Whatever you think of kids’ screen time, we want it to be quality time. There is some evidence that interactive apps support early academic development, but finding quality early literacy apps can be difficult and time-consuming. Lots of what’s available is (IMHO) simply rubbish.

It’s helpful to read adult reviews of apps for children, but a lot of online information is available about them already, and to REALLY road-test an app, I like to watch a young child using it. My colleague Caitlin Stephenson and I have thus filmed Harrison (aged 4, nearly 5) trying out some of my favourite early phonemic awareness and phonics iPad apps for young children.

The resulting video is below. We hope it gives you a taste of how each app works, to help you decide whether it would suit the small person/people in your life. The video is 16 minutes long, and the apps tried are listed below (numbers in brackets are start times on the video clock):

The only tablet I have is an iPad, but some of these apps are available for other platforms. Many also work on iPhones. If you’re not in Australia, please note that my app store links are all to the Australian store, so you’ll have to search your local store for apps that take your fancy.

I’m not quoting prices here because they often change, and things that I’ve said are free suddenly aren’t, while things I’ve said are expensive drop in price. Also, some apps have hundreds of activities, while some have only one/a few, so it’s like comparing apples and banquets. I’ve decided to leave the value-for-money question up to you.

Other early literacy iPad apps IMHO worth considering for young children include:

Beginners’ decodable books allow children to practice phonics skills by reading stories  containing simplified spelling patterns, and some of these are also available as apps:

Apologies to all the people who make good apps of which I’m not aware. I’d love to hear about them, and wish I had more time to search for and try them.

I hope this blog post helps you find apps that the small people in your life enjoy, and which help them develop great early literacy skills.

When working on decoding and spelling two-syllable words with a student, I often use the TRUGS deck 4 cards, which include the word “mishap”.

Invariably, my students parse this as “mish-ap”, rhyming the first syllable with “fish”.

At first this made me want to get out my correction tape and replace “mishap” with a word that would give them more immediate syllable-parsing success.

Then I realised “mishap” provides a perfect opportunity to discuss how spellings that look like digraphs aren’t always digraphs, so we also need to think about what word parts mean and how letters might work separately when tackling unfamiliar words. END_OF_DOCUMENT_TOKEN_TO_BE_REPLACED

The three of them often come to our first session. After we’ve done some assessment, we often have a conversation that goes something like this:

Everyone knows phonemic awareness helps spelling, but we tend to focus a lot on the auditory aspect of phonemic awareness, and not much on its articulatory or kinaesthetic aspect – feeling the sounds in our mouths.

Cats and dogs are all different, but with language and world experience children develop an abstract idea of what a cat is, and what a dog is, which allows them to differentiate these animals in the street (on the basis of size, shape, movement, sound etc, plus knowing that if it rolls its eyes and walks off, it’s a cat).

Likewise, actual productions of phonemes are all slightly different, and children need to develop an abstract idea of what a /p/ is, and what a /b/ is, in order to differentiate them when meeting them in the speech stream.

These abstract ideas are based on what /p/ and /b/ sound like (acoustic properties), and how they’re produced (articulatory properties). We start developing these abstract ideas when we’re babies, or we wouldn’t be able to tell the difference between the words “pea” and “bee”, but we don’t naturally develop conscious awareness of these individual sounds.

When we start to learn to read and spell, we must become consciously aware of phonemes (i.e. develop phonemic awareness) in order to link them to the graphemes which represent them in our writing system. It helps to become conscious of not just how phonemes sound and look, but how they are produced in the mouth (see here and here for relevant research, and here for videos of my excellent niece saying each phoneme in Australian English).

Learners can’t easily slow down other people’s speech to make the individual sounds easier to discern. They can slow down their own speech, making it easier to identify each sound and feel how it’s produced, and see in a mirror, and decide whether it’s (figuratively speaking) canine, feline, leonine, vulpine or lupine (a great list of animal adjectives is here).

Many kids don’t like saying the sounds in words as they write their spellings. If I had $100 for every time I’ve said, “I can’t hear you” during a say-and-write spelling activity, I’d be richer than Croesus. The usual objection is that saying sounds while writing seems weird and/or babyish.

If we want kids to say words slowly, feel them in their mouths and think about their sounds when spelling them, it’s a good idea to model saying sounds/syllables/words as we write them ourselves. If kids see adults doing this routinely, they won’t think it’s babyish or weird.

Conversely, if adult behaviour makes skilled writing appear like a silent, visual task unrelated to speaking, many kids (and sadly some adults) will believe that’s what it is.

I’d like adults within earshot of young children to consciously and routinely sound out/say words as they write them: on the whiteboard, the shopping list, the calendar on the fridge, when filling out forms, wherever. The internal speech good spellers use when writing is not accessible to kids. We need to put it out where they can see, hear and imitate it.

The authors of the Sounds-Write program have the perfect term for this say-as-you-write behaviour, though they use it mainly in relation to spelling multi-syllable words: using your “Spelling Voice” (see p21 of this document).

If learners aren’t saying/hearing any sounds, how can they be linking sounds to letters/spellings? Saying words slowly while writing them should be expected and praised learner behaviour.

Once you know the main sound-letter relationships, you can use this knowledge to “over-pronounce” words with unstressed vowels (flow-ER, act-OR, coll-AR, murm-UR, del-I-cAtE, rest-AU-rant etc), in order to remember how they are spelt.

I like to tell students that using their Spelling Voice is a bit like talking like the Queen. The Queen would never dream of saying “choclit” like us plebs. She says “choc-o-late”. She pronounces things like the “t” in “often” and “soften”, and the “p” in “raspberry”.

Unlike my generation, lots of today’s kids have never heard the Queen speak, and the younger Royals’ speech is, sadly, less studiously posh. So maybe it’s better to tell kids that they should speak like a robot when spelling. After all, robots always pronounce the /i/ in “exterminate, exterminate” and the /i/, /o/ and /er/ in “philosopher”.