My teenage nieces have been visiting (yes! excuses to go ice-skating, to the drive-in and 3D movies, theatre, swimming,  galleries and do lots of feasting and lounging around laughing) so I got them to agree to play guinea pigs for some of my nonsense word spelling tests.

Most available nonsense word tests don't test all the important letter-sound links more than once, and thus it's sometimes a little tricky to get a clear picture of precisely where learners' skills are breaking down, and exactly which spelling patterns they need to practise. So I've made up my own tests, which you can try here.

2. Using grammatical information, such as whether the new word was used as a noun or a verb,

3. Thinking of a word containing the new word,

For example, when asked to write the new word "vuft", if I said an example sentence like "I saw a vuft" (i.e. used the word as a noun) they wrote "vuft". If I said "Here is a rax", they wrote "rax".

When I asked for "chelt", the niece from Sydney said "That's easy, because of Cheltenham", and the other one said "oh yeah" and they both got it right (good girls).

To double or not to double

That's why the older one was right about "shiss" (though I didn't say so, what sort of an auntie do you think I am?). To be absolutely certain of spelling a "s" sound, not a "z", after a "short" vowel, double the "s"1. Otherwise, it can be interpreted as a "z" sound.

However, my older niece didn't double "f" after short vowels as consistently as the younger one (she wrote "tef" and "kef" not "teff" and "keff"), perhaps because of analogies with "ref", "chef" and "treble clef".

Once I asked her why she wasn't doubling "f" at word endings, she started doubling final letters all over the place, so I had to reverse my interference and tell her that the main doublings at word endings after a "short" vowel are "ff", "ll", "ss" and "zz" (plus we tend to use "ck" not "kk", "dge" not "jj", "ve" not "vv" and "tch" not "chch", which just looks silly). 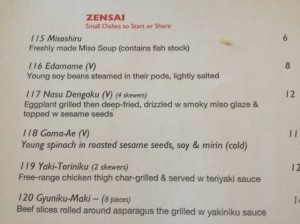 Both girls correctly wrote "kidge" and "keft" with the letter "k", and "cass" and "cadth" with a "c", though the younger one wrote "kinch" as "cinch".

I interpret this to mean that the older one has internalised the usual pattern for where to use the letter "k" for the sound "k" (before e, i and y) and where to use "c" (other places), but the younger one hasn't, perhaps because of  too much skating and exposure to kangaroos, koalas, kauri trees, kale, kaffir lime leaves, kayaks and the fact that she is learning Japanese (kanji, karaoke, karate, kamikaze, kowtow, haiku etc).

We didn't help her by going to Chocolate Buddha yesterday for lunch, with its menu full of words like "tekkamaki", "daikon, "gunkan", "panko" and "wakame".

A fifth strategy my nieces probably would have used, except that I'd excluded relevant words from the spelling test, is whole word recognition.

If I put words like "sumpty" or "wungle" or into a nonsense word spelling test, it would be understandable if learners wrote "sometee" and "onegle", because of the common but unusually-spelt words "some" and "one", plus because the sounds "m" and "p" are both made with the lips, so can blur together in ordinary speech.

However, whole word recognition/memorisation is the dominant literacy strategy taught in my local schools, so my spelling tests specifically exclude words that learners could spell using primarily this strategy.

I'm interested in the other, neglected strategies, and how to explicitly teach and strengthen them.

One thing you discover when administering nonsense word tests is how similar many of the sounds of our language are, and how easily they can be confused, not just by beginners. Both my nieces asked "pardon?" and then watched my lips intently, and repeated what I said, whenever we came to a word containing "f" or "th".

That's because they're aware (consciously or not) that these two sounds are almost impossible to distinguish just by listening. They're both soft friction sounds made at the front of the mouth, millimetres apart.

Thankfully there aren't many actual words that differ only by these sounds (with/whiff, thin/fin, think/you rat fink and a few others), so in real live sentences we don't generally confuse them, except perhaps when an optimist asks "how much?" and hears "free". But even then, the shop assistant would probably say "three dollars" not just "three".

My literate nieces asked me to repeat lots of other words, but occasionally one of them would still confuse similar sounds e.g. write "roub" for "ralb", "shrap" as "shrup" or "mubbed" as "mumbed". The mouth is a mushy place, and the boundaries between sounds are not as sharp as we like to think they are.

In ordinary conversations, we correct for this using our vocabulary, and "hear" the words that make sense in the sentence. Language-learners without strong vocabularies can't do this as easily, which is why my Spanish teacher went into fits of giggles when she took me to a talk about human rights and I wondered why they kept talking about turtles (torturas/tortugas).

The letter that is a cross between A and U

Occasionally my younger niece, who isn't terribly confident about her spelling, wrote the bob-each-way letter that's like a cross between a lower-case "a" and a "u" – not properly joined up at the top.

She laughed when I pointed it out, and said it's a good letter for when you're not sure whether to write "a" or "u". I blame her whole-language early literacy curriculum, and particularly the word "a" (see another blog post about this).

More than one way

Too clever, or maybe her teachers were.

Your own guinea pigs

Please feel free to use my non-word spelling tests to explore what your learners know about sound-letter relationships, grammar in spelling and the use of rhyme and analogies to work out the most likely way (or ways) to spell a new word.

I've put myself presenting the tests on YouTube so you can take the spelling tests yourself, to get the hang of them, before inflicting them on others.

Each has an answer key which provides the most likely spellings, plus links to wordlists your learner might like to practice to consolidate any pattern the test suggests isn't part of their repertoire yet. I hope the tests are useful, and sorry I haven't put up Levels 8-10 yet (I'm working on them).