There's a new Oz Phonics app out, and the nice chap who made it sent me a code so I could download it and check it out (thanks, Steve!), and save breaking the bank on the $2.99 purchase price.

In the course of emailing Steve my feedback on Oz Phonics 3, I discovered something embarrassing.

I've only been using half the previous two apps, Oz Phonics 1 and 2.

I didn't notice they had a little scroll thing next to the menu.

So I thought there were six activities in Oz phonics 1 and six in Oz Phonics 2, but there are actually 12 in the first version and 15 in the second. 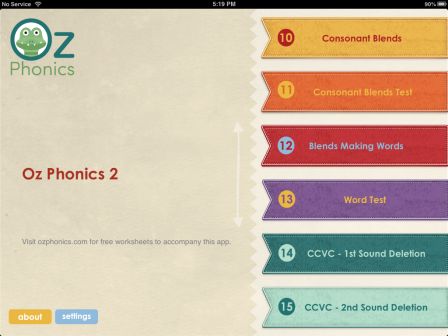 In Oz Phonics 3, there are 12 activites, and the ones I like the best are:

1. Find a word CCVC, which is like a wonderword, where you have to find the CCVC words and drag your finger over them to highlight them, whereupon the word appears at the top of the screen and is sounded out and said, with (hallelujah!) crisp consonants. 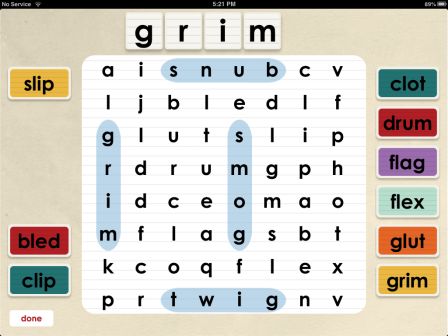 5. Missing 3rd letter CVCC, in which you hear a word and then have to drag the missing third letter into it to hear the whole word. Errors are ignored, which is great. No fun boing or raspberry noises that some learners like more than getting the answer right. There are no pictures for these words, but Steve says these might be something he can add in future versions, and you can be sure I won't forget to nag him about this. 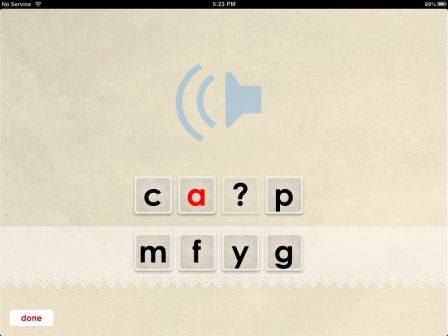 6. Missing 4th letter CVCC is the same, but with the last letter in a final blend missing.

7. Find a word CVCC is much like activity 1 but with different words (words with consonant blends at word endings, not word beginnings).

Activities 2, 3 and 9 are spelling tests where you press buttons, write the words you hear, then when you've written them all you can check your spellings against the words in the app. Which I'm not too sure about till I try it out with a few learners. Maybe they'll find an iPad-administered spelling test more fun than one I administer, especially if I call it a "Spelling Challenge".

From where I sit in Melbourne, Oz Phonics apps have one excellent thing that I don't think any other apps have – an Australian accent option. Unfortunately version 3 doesn' t have a NZ or British accent option, like their first couple of apps. Folks across the dutch had better get onto Steve and start nagging. When you're working with vowels, accent can really make a difference for some learners, for example, some American pronunciations of "hot" sound like "heart" to Australians.

Anyway, as Kath and Kimdarella would say, noice.