How words cast their spell 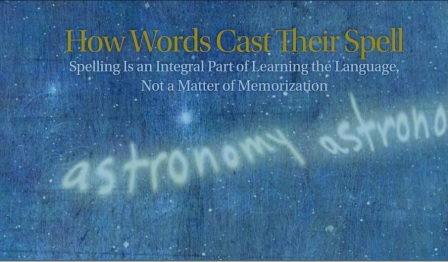 I recently joined the US-based SpellTalk email list, and it was having an interesting discussion about which articles they recommend for student teachers’ reading lists.

This fattened up my Articles I Must Read folder considerably, and yesterday the sun was out, the birds were singing, my chores were done, and the little kids next door were playing doctors and nurses (too funny!), so I put up the hammock and got reading, of course interspersed with a little bit of eavesdropping on the surgical dramas unfolding through the hedge.

The article I’m going to write about today says that spelling is the abandoned stepchild in the family of language arts, but that knowledge of spelling is closely related to reading, writing and vocabulary development, as they all rely on the same underlying language abilities.

It’s called: “How Words Cast Their Spell: Spelling Is an Integral Part of Learning the Language, Not a Matter of Memorisation”, and as its subheadings are also magnificently capitalised, I’ll use them below.

Don’t Students Learn To Spell through Flashcards and Writing Words?

They write, “Good spellers develop insights into how words are spelled based on sound-letter correspondences, meaningful parts of words (like the root bio and the suffix logy), and word origins and history. This knowledge, in turn, supports a specialised memory system – memory for letters in words…Therefore, explicit instruction in language structure, and especially sound structure, is essential to learning to spell”.

The Real Magic of Spelling: Improving Writing and Reading

Having poor spelling causes embarrassment but also stops you from getting your work done and communicating your message, as it takes attention away from things like planning, thinking of ideas, organising them and checking your progress.

Young children get good at both spelling and reading when they’re taught speech sound awareness and sound-letter correspondences explicitly and directly in the first two years of school.

Spelling also has a strong relationship with reading comprehension, as both rely on proficiency with language.

Taking into account other information like word origin and meaning, only four percent of English words are truly irregular.

Written language is not just speech written down, it represents meaning. Consider how easy it is to understand each of the following two sentences:

They rode along the rode, and when they reached the lake, they rode across it.

They rode along the road, and when they reached the lake, they rowed across it.

Our writing system also reveals some of the history of the English language, by preserving spellings from source languages. We have the Anglo-Saxon “ch” in chair and chief, the French “ch” in chef and chauffeur, and the Greek “ch” in ache and orchid. In very general terms, about 20-25% of English words are from Anglo-Saxon, 60% from Latin (some via French) and about 15-20% from Greek.

2) Syllable patterns and meaningful parts of words, and

What Should Be Taught in Each Grade?

There’s some variation between spelling programs but the following sequence is suggested to guide primary teachers:

I’d be inclined to minimise the sounds-separate-from-letters stuff in the first year and get cracking on the second and third year stuff as quickly as possible, but I usually work with older kids who have fallen behind, so work intensively, conscious that there’s no time to waste. Perhaps in mainstream classes the pace can be more leisurely.

How Should Spelling Be Taught?

Students should be taught to recognise, learn and use the patterns of English spelling, through carefully-planned, systematic, explicit instruction and activities.

Two programs discussed in the article are Primary Spelling By Pattern (for early years) and Spellography (for upper primary students). These are both American programs, so would require some expert adaptation before use by speakers of Australian, UK, NZ or similar Englishes. The program Sound Waves is the closest Australian English equivalent I know about.

How Should Spelling Be Assessed?

Assessment of spelling should evaluate what students know about sounds and spelling patterns e.g. Are they confusing the sounds “p” and “b”? Do they know where to double letters when adding a suffix? This sort of assessment takes longer than simply marking spellings right or wrong, but is more useful for designing well-targeted instruction.

A reference is provided for an article containing a seven-point rubric for scoring early spelling skills – click here to read it.

Spelling is a psychological, linguistic and conceptual process involving knowledge about the alphabet, syllables, word meaning and the history of words. It’s not a visual memorisation task. It shows us what a person knows about words.

“How Words Cast Their Spell” should be on all student teachers’ literacy education reading lists, near the top. It’s by R. Malatesha Joshi, Rebecca Treiman, Suzanne Carreker and Louisa C. Moats, published in American Educator in the Winter of 2008-2009, and you can read the whole article yourself by clicking here.

One thought on “How words cast their spell”