I’ve been doing a lot of swimming lately because I’m a cyclist, but that doesn’t deflab your upper arms. I live near a glorious outdoor swimming pool (saved from closure by a community occupation, so we love it all the more) and work near its newly-refurbished indoor sister pool. They were offering cheap summer memberships, so I dove in.

I’ve never been much good at swimming. I had swimming lessons as a young child, but was timid and asthmatic, and made slow progress. We had a little Clark Rubber backyard pool, but it was for flopping around in on hot days, not actual swimming anywhere.

It was only when I was twelve and realised the cool kids were swimming across the local swimming hole and having a wonderful time jumping out of trees and from a jerrybuilt flying fox into the water, and I couldn’t, that I really focussed properly on the task, and taught myself.

I only have one swimming achievement – a friend and I won the Clown Dive and took our House to victory in the high school swimming sports with silly costumes and antics followed by (for the first and only time in my life) a bomb off a three metre diving board. The real achievement was showing little kids you don’t have to be in the Body Beautiful, Tumbleturn Brigade to participate and contribute.

My swimming style needs stroke correction, no doubt about it. My childhood swimming teacher had a hard enough job just getting me to put my face in the water and float, so we never got up to the next part.

I breathe only on one side, I kick intermittently (arms and legs together? Really?!), my arm action is paddle-steamerish, my head isn’t far enough in the water, there’s too much splashing, and I don’t go very fast. There was no swimming teacher around to correct me by the time I was finally ready to learn.

I thought I’d work on these things over summer. Stroke correction classes don’t start for a couple of weeks, but perhaps there are nuts here I can crack on my own.

I’ve googled “improve your swimming stroke”, found Mr Smooth, and studied his action. Like any good therapist, I’ve done my my task analysis. Head turn, kicking, head position, arm movement. I focus on them one at a time, and practise most days.

Once you get into the swing of it, going up and down a pool gives you time to think. I’ve been thinking about the parallels between learning to swim and learning to write.

They’re both skilled activities that require you to concentrate on what you’re doing, do it correctly, then keep on doing it, until the doing becomes automatic.

I know in theory how to swim just like Mr Smooth, but getting my unruly body to match practice to theory is quite another thing. Over many years, I’ve practised my paddle steamer action to automaticity. Overriding it with a new action is hard.

Lots of kids I know form letters incorrectly. They start letters in the wrong place, go round the wrong way, use two movements per letter instead of one, join in the wrong place and get the hanging-down and sticking-up bits wrong. For example, they write the letters “b”, “r”, “e”, “p”, “j” and “m” like this: 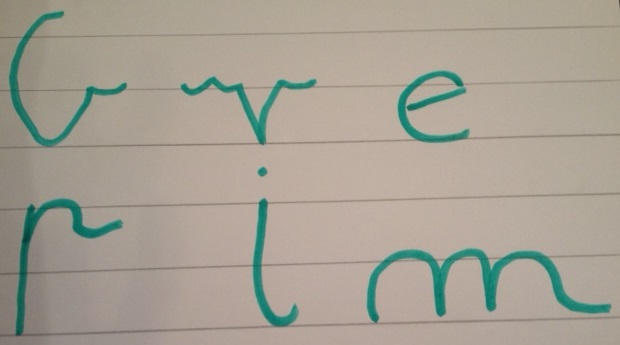 They also have poor awareness of sounds in words, and spell poorly, which is why they’re seeing me.

Sometimes they’re refugees who never went to primary school. They had six months in an English Language Centre to learn English, what school is, and how Australia works, before starting at a mainstream Australian secondary school. It’s no wonder their letters and spelling are a bit cactus, and secondary Student Support staff have to go back to basics – systematically and explicitly teaching letter formation and spelling patterns.

However, lots of older kids with dodgy handwriting and poor spelling were born here and have attended school since age five. When everyone else got off the literacy starting blocks, they just didn’t.

I guess as little kids they were a bit like me, still in the shallow end trying to put my face in the water and float, long after everyone else had headed down to the deep end to get swimming certificates, and do bombs. It’s hard to then catch up, and if you teach yourself, you’re likely to learn some bad habits.

Have a look at this gorgeous piece of writing by my Great Auntie Annie Vickers, who went to the same tiny, bluestone, rural school I attended, but over century ago: 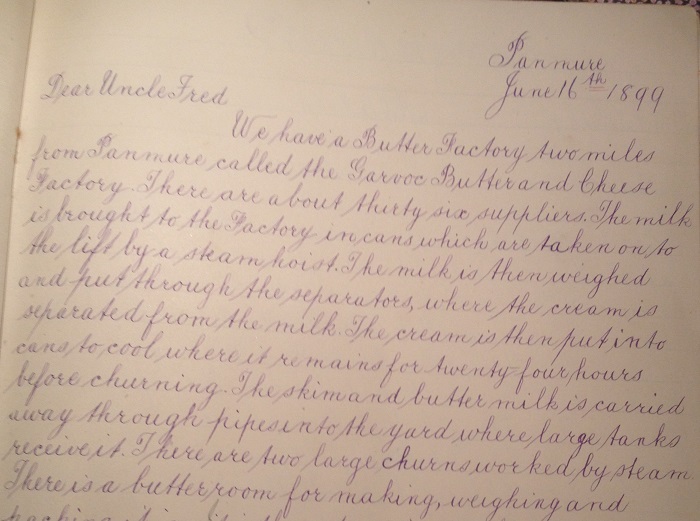 Copperplate is now out of date, but she didn’t learn to write and spell like this by being handed a blank page and encouraged to do freeform creative writing. She did some serious, organised handwriting and spelling practice.

In praise of tracing, copying and filling gaps

When learning skilled activities, it is OK to practise subskills, like kicking, breathing efficiently, forming letters and putting them in the right place on the line. Swimmers Leisel Jones and Ian Thorpedo did an awful lot of repetitive, skill-refining practice long before their Olympic blaze of glory.

Yes, tracing and copying and filling gaps are less accomplished writing tasks than composing an imaginative personal story on a blank page, or writing a postcard to Alison from the beach (So, where are all my postcards, folks? You said you’d send me a postcard).

Tracing, copying and filling gaps are like the kickboards, noodles, floaties and shallow end of writing and spelling. They let you practice important subskills like letter formation and spelling without having to also think of what to write, which words to use, how to put sentences together, how to connect up the text, what genre of text you’re creating and who your audience is.

If you don’t take long to master the subskills, good for you. Lots of kids do. If they try things that are too hard for them before they have the basics right, they soon turn mistakes into habits.

Teachers and parents steeped in the philosophy of education-as-edutainment often think that asking bigger kids to do things like tracing and copying is just asking for a groanfest followed by a huge battle.

In fact, kids overcoming significant writing and spelling problems sometimes ASK for such activities, once they realise they’re what really build their skills.

Last year, a group of Grade 3, 4 and 5 students who were working on vowel spellings asked me for some letter-tracing activities. The most articulate of the group said that he enjoyed practicing getting the letters right, because forming letters correctly is quite hard for him, and he’s had a lot of practice getting them wrong. A Grade 4 boy, who enjoys computer games I find too hard and scary, wanting to do tracing! The others (who have language impairments or intellectual disabilities) all nodded.

I also had two secondary school girls complete my Levels 1-5 workbooks, and then decide they knew enough about the mechanics of writing and spelling, and to skip Levels 6-8.

One of them had a little sister with more staying power, who did all the workbooks, asking thoughtful, intelligent questions about each spelling pattern as she went e.g. before working on the words “bandage”, “blockage”, “cabbage”, “damage”, “garbage”, “luggage”, “message”, “package”, “passage”, “postage”, “village” and “vintage” on page 91 of Level 7, she’d ask, “this end part looks like ‘age’ but we say ‘idge’, correct?” Then she’d write each word neatly twice, first by copying, then recalling, saying every sound as she wrote.

She was soon writing and reading more competently than her older sister, and tackling the Year 8 novel. Soon the older girls were back, asking to do Level 6.

Who am I to argue? I’ve been able to swim a kilometre in the medium lane for years, but this summer I’m back in the boring old slow lane with my kickboard. Except it’s not boring because I know what I’m trying to achieve, and that I can’t graduate to the fast lane till I kick correctly and consistently.

Swimming is optional, writing and spelling are not

Swimming is an optional activity in adult life, even in Australia. Self-taught paddle-steaming gets you by, and you aren’t penalised for not being able to swim like Mr Smooth, unless like my friend Sam you have a teenage daughter who won’t go to the pool with you because she’s embarrassed by your swimming style. If you can’t swim, just don’t (but please wear a life jacket on boats).

Somewhere around the middle of primary school, being able to write and spell stops being optional. It’s simply assumed that by then, everyone can do it. If you can’t, lots of life’s doors close in your face.

It’s no disgrace to go back to copying, tracing, filling gaps, or noodles and kickboards, if you need to. My workbooks are only one of many ways to do this, though few synthetic phonics practice activities can be done in Victorian Modern Cursive Script, the handwriting style used in government schools in Victoria, WA and NT, Australia, if that’s what your child is being taught at school.

Skilled behaviours are made up of subskills, and some of us have to learn subskills one at a time before we can put them all together, and really get going.

Right, that’s it. Apologies to those of you on the freezing side of the world, but it’s a glorious summer day here, and I’m off to the pool.