A key criticism leveled at the very sensible use of nonsense words to assess children's awareness of sounds and spelling pattern knowledge is that they don't mean anything.

But how true is that?

In the UK all Year 1 children's reading word attack is now tested via a Phonics Screening Check, so I thought I'd ask Google for definitions of some of its example nonsense words:

Of course, as soon as you see this page, you interpret these "nonsense words" meaningfully, as the names of aliens. You can describe them: a vap is friendly and yellow, with one eye, two arms and two legs. If I tell you that last night I was kidnapped by vaps and taken to the planet Acrion (a word I got from the hilarious website fantasynamegenerators.com), you would understand what I mean, and think (I hope!) that I was either joking, hallucinating or an idiot.

Here are some of the things Google told me these supposedly meaningless words mean:

Sounding out acronyms is a well-established way we devise new words, like the word "scuba", which originally stood for "Self-Contained Underwater Breathing Apparatus". Turn to your neighbour and ask her or him to define "scuba". Odds on he or she will talk about what it means, not what the letters stand for. 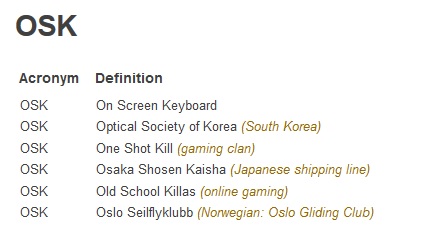 You can't tell me nobody in computing, Korea, gaming, Japan or Norwegian gliding pronounces "osk" to rhyme with "mosque". Google also reminded me that "Osk" can be short for "Oskar":

Though if you tell me being called Osk makes you an idealistic social contributor, I will think that you are joking, hallucinating or an idiot.

Just glancing through the first few of Google's 14.8 million answers, I discovered that as well as being a common misspelling of the abbreviation for "et cetera", "ect" is the acronym for Electroconvulsive Therapy, the Edge Crush Test (used to assess container strength), and the South African Electronic Communications and Transactions Act of 2002. You cannot tell me that nobody working in psychiatry, storage or the South African legal system pronounces "ECT" to rhyme with "wrecked". We humans love shortcuts.

The boundary between real and nonsense words is very porous

It's time to recognise that the Real Word/Nonsense Word dichotomy is a false and unhelpful one.

Words are always coming and going in our language. Who knew the words "vlog", "twerk" or "cli-fi" 10 years ago? But now they are all, apparently, Things, and will soon be in dictionaries, perhaps they are already.

In Middle English, "artow", "han" and "nys" were all Real Words (click here for a list of the 100 most frequent Middle English words). They don't mean anything to the average English speaker now, but if you've cracked the English spelling code, you can still say them (insofar as it's possible to know how people actually pronounced words 600 years ago), because our spelling code has stood the test of time pretty well.

Modern life involves constantly having to read unfamiliar words – people's names, places, shop names, new products, words on posters and menus, and so on. I like to take photos of them, here are a few from my collection: 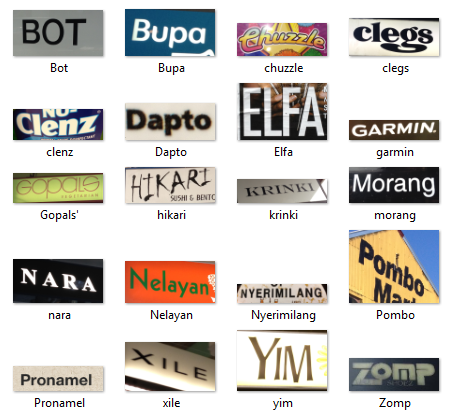 We need to equip all children with the skills they'll need to read whatever crazy words life throws at them, many of which are yet to be invented. To do that, we must systematically and explicitly teach them to crack the English spelling code.

George Lakoff updated "Don't Think Of An Elephant" last year, I must get a copy, because I'm sure it will help me spin synthetic phonics in a positive, proactive way that will appeal to teachers.

Objections to phonics often revolve around perceptions that phonics is oldfashioned, meaningless, and dull (i.e. conservative), so I am trying to reframe it as modern, meaningful and fun (i.e. progressive, and thus aligned with the majority of teachers' values). Tomes full of graphs showing effect sizes, or hitting people with the This Is Good For You stick, simply isn't going to work, or work quickly enough. Having the arch-conservative Federal Education Minister on Team Phonics is also more likely to make most teachers run a mile than join the team (I always want to shout, "Get off my team!" at him).

"New words" sounds a lot more modern, meaningful and fun than "pseudowords", "nonsense words" or "non-words" (though aficionados of Lewis Carroll and Dr Seuss would naturally disagree). It's also worth noting that Australia's first Minister for Immigration (and I wish he still was), used the term "New Australians" to put a positive spin on non-British European immigration after World War II, and it did seem to have the desired effect.

We have swathes of gold standard evidence to show that the sounds and spellings of our language must be explicitly and systematically taught to young children, if everyone is to achieve to their literacy potential. But being right doesn't mean you win.

Galileo knew the sun didn't revolve around the earth, but it didn't help him with the Inquisition. Two of his five siblings didn't make it past infancy, but here we are in the 21st century, with anti-vaxers still putting children's lives at risk. Climate scientists are shouting from the rooftops that we must reduce greenhouse gas pollution to avoid dangerous global warming, but people are still leaving appliances on standby, buying SUVs and taking overseas holidays in droves.

What explicit, systematic, synthetic phonics urgently needs now is not more or better science, but more and better marketing, based on an understanding of teachers' values, and using language which aligns it with these values.