Children starting school often have immature articulation, and still can't get their little mouths around sounds like "z", "r", "v" and "th". Many children still can't produce the difference between "fin" and "thin" or "vat" and "that" at age eight or even later.

However, children typically have to deal with the letters/spellings representing these sounds in their first year of school. The classic example is the word "the", one of the first written words children are expected to read, though few 5-year-olds can actually say "th".

Teachers and parents often refer children to Speech Pathologists because, "He says 'I fink' and writes it with an F" or "She says 'a wabbit' and writes W". If children are not aware of the existence of the separate sounds "th" and "r", they're just being logical, but that's not going to help them spell these words right.

Children often "collapse" two similar sounds into a single category, such as "s" and "th", and hear word pairs like "sink-think", "sick-thick" and "sore-thaw" as homophones (the latter if you speak Australian/UK English, but not American English). 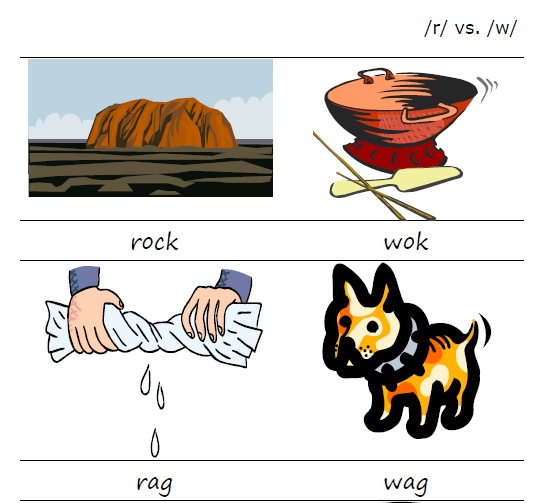 These are called "minimal pairs", for example "choose" and "shoes" sound the same except one has "ch" at the start, and one has "sh".

There are whole sets of minimal pair pictures on the internet, but it can be hard to find the key contrasts that typically confuse kids who are just talking like typical four to seven-year-olds.

Australian Speech Pathologist Caroline Bowen has an amazing website where she very generously makes minimal pair pictures freely available, though she asks for a donation towards site upkeep and bandwidth if possible. Now that I understand the time and money it takes to keep a website going, I urge you to donate if you can (I've done so now, but should have long ago).

Here are the links to Caroline's pages of minimal pair pictures for some of the late-developing consonant sounds that often worry parents and teachers.

I cannot emphasise too much that if you're not sure whether a child has an articulation delay (not just a speech error typical of her or his age), please consult a Speech Pathologist, especially if the child is sometimes hard to understand. Children who can't say sounds like "k", "g" or "f" at school entry need speech therapy.

While many young children may not be able to say some of these sounds, just being aware they're different when starting to read and spell them can help make more sense of their spellings. And being aware of them is the first step on the path to being able to say them.

Note that by their fifth birthday most children should have nailed "sh" and "ch", please refer them to a Speech Pathologist if not. I've included these sounds because some children start school at age four, and some preschoolers demand to be taught to read and spell before they start school. 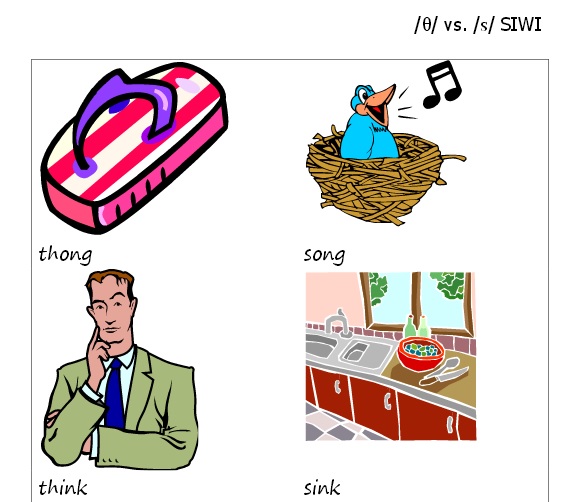 Note also that the pictures use Aussie English vocabulary, e.g. a thong is an item of clothing you wear on your foot. Any pictures that you don't think are relevant (wherever you are) can be left out of whatever listen-for-the-difference game you decide to play with them. The three pictures in this blog post are all from Caroline Bowen's minimal pair pictures.

I hope this helps you explain to small people why the words "think" and "sink" are written differently even though they sound the same. The answer is: they don't. And that's often news to small people.