Arrowsmith: the triumph of marketing over science

Barbara Arrowsmith-Young is back touring Australia, promoting her controversial Arrowsmith program to parents and teachers of children with learning difficulties.

Oxford Psychology Professor and all-round legend Dorothy Bishop succinctly summarised  informed professional thought on this program a couple of years ago in this tweet:

Barbara Arrowsmith-Young got famous by writing a book called The Woman Who Changed Her Brain. But as Macquarie University Professor Anne Castles has pointed out, we all change our brains every day. It’s called learning.

In 2015, NZ researchers George Dawson and Stephanie D’Souza assessed and synthesised the evidence then available on a range of programs including Arrowsmith (see p4-8), to help parents, educators and policy-makers reach better, more informed conclusions. The Arrowsmith program was then over 30 years old. The researchers concluded, “it is not the case that (present) neuroscience research actually supports the use of Arrowsmith’s particular exercises to remediate learning disabilities”.

In 2017 a Canadian court decision on the Arrowsmith program agreed, concluding “there is no scientifically rigorous, objective evidence that supports its efficacy according to the evidence presented at the Tribunal”.

Bloggers can call a spade a spade more readily than courts and academic researchers, and write in a more entertaining and accessible way. Psychologist Robert Shepherd’s 2017 blog post is a good example: “10 ways to sell your product even when there’s no evidence that it works: The Arrowsmith Program of Cognitive Exercises“.

Neuroscience is a branch of science, and thus must follow the scientific method. A major, longstanding criticism of the Arrowsmith program has always been its lack of proper, scientific research, which is published in respectable journals, and avoids or declares conflicts of interest, such as (ehem) publishers funding research into their own programs.

Last year an article about the Arrowsmith program which at first seemed promising appeared in the journal Learning: Research and Practice. Dorothy Bishop quickly and succinctly pointed out why scientists cannot and do not take it seriously:

You can read Prof Bishop’s longer comment on this study here. Another comment pointed out that the lab carrying out the research received funding from an Arrowsmith school. Here’s a screenshot confirming this, in case the web page suddenly disappears, as a University of Memphis web page annoyingly did after I linked to it to show that Heinemann (publisher of Fountas and Pinnell’s Leveled Literacy Intervention program) had funded research into, (you guessed it) Fountas and Pinnell’s Leveled Literacy Intervention.* 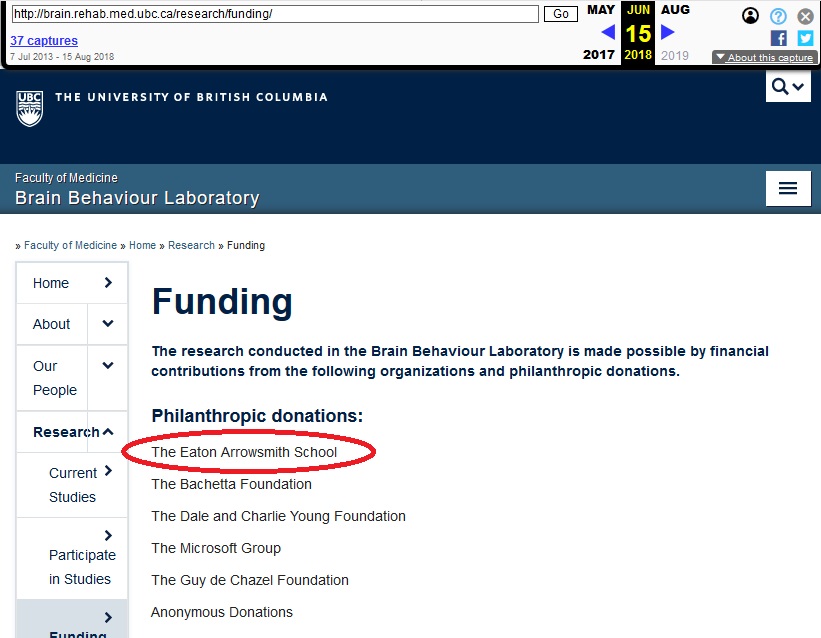 Far from acknowledging this glaring conflict of interest, the online article says:

The Australian media has been shockingly credulous in its reports about Arrowsmith, with even experienced journalists falling hook, line and sinker for its marketing narrative, sending the ABC’s Media Watch host’s eyebrows through the roof in 2017.

Australian politicians have also tended to suspend their critical faculties in the face of Arrowsmith marketing, with everyone from local MP Nick Staikos to Education Minister James Merlino to Premier Daniel Andrews lending it support and credibility. When I last hassled Nick Staikos about this, he said the government is funding the BUILDING in which the Arrowsmith program runs, not the PROGRAM itself. Somehow he thinks it’s OK to do this with my taxes.

As a staunch supporter of trade unions, I was horrified in 2017 to see the Australian Education Union lending Arrowsmith-Young credibility. This year my Appallometer has gone into overdrive because my favourite bookseller is giving her a platform: 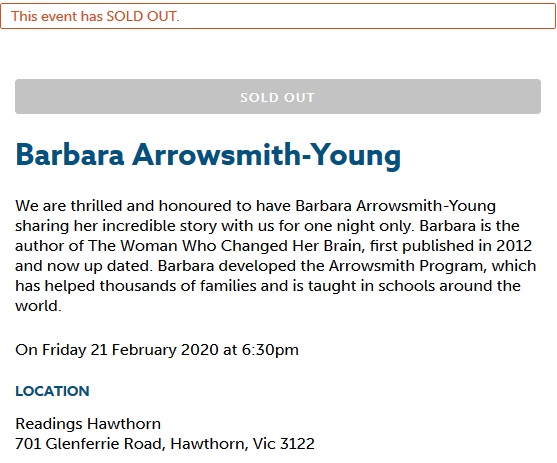 I wrote to Readings saying I was shocked, and asking whether they knew that the approach they are helping promote to desperate parents lacks scientific foundation. They replied that they don’t endorse everything written by authors on their shelves, have no intention of misleading the public and look forward to my participation in robust and respectful discussion about this.

Let’s hope they ditch the “incredible-helping-thousands” hyperbole on the night, and make it clear that most relevant experts disagree with much of what their speaker says, and don’t recommend her program. I wish they would also use the opportunity to sell recent, scientifically well-respected books about the brain from their catalogue, such as the new Stanislas Dehaene one, or last year’s one by Maryanne Wolf.

Sadly I was so crazy-busy last week that the Readings talk sold out before I got around to booking (I need more staff! Interested Melbourne Speech Pathologists and Occupational Therapists, please send me your CVs!). Maybe that’s for the best, as I find it hard not to shout and smash crockery while watching Barbara Arrowsmith-Young online, and I wouldn’t want to injure myself with a Tracey-Ullman-does-Angela-Merkel eye roll.

I’m also conscious that Prof Pam Snow followed up her blog post Why Not Everyone Is Enthusiastic About the Arrowsmith Program with a four-hour round trip to Barbara Arrowsmith-Young’s talk at the AEU in 2017, aiming to engage in robust and respectful discussion. By the time she got a chance to speak, the marketing pitch had been delivered and swallowed, most people were tired and either leaving or lining up to get a signed book, and there wasn’t much chance for her to get her message across.

I’ve thus decided to contribute to the discussion at Readings Hawthorn at the BEGINNING of the talk by handing out an A4 version of this blog post at the door. If you want to help, great! If you’d like to give it out at one of the other Australian Barbara Arrowsmith-Young talks, you can download it here. Silence is too often misinterpreted as agreement, and parents of struggling learners need to be well-informed before they decide how to spend their money and (more importantly) their children’s precious learning time.

We all want to believe in lovely stories. Pointing out they’re just stories and asking for evidence gets you the Sour Grapes award from many people. But the Speech Pathology Australia Code of Ethics requires people like me to tell the truth, seek to benefit others, prevent harm and educate the community on topics within my professional expertise.

Of course parents who understand the controversial nature of the Arrowsmith program, but still want their child to do it, are entirely within their rights. However, they should go into it with their eyes open, and I would caution them against signing anything that might later make it difficult to criticise the program, if they find it doesn’t live up to expectations.

* If you know about this conflict of interest in Fountas and Pinnell research, you can still find it on the University of Memphis website, here’s a screenshot:

Rather than acknowledging that this is a glaring conflict of interest (how many researchers are going to bite the hand that feeds them?), the researchers thank Heinemann for funding a study that (surprise!) concluded that their program was effective:

For an explanation of how this study actually showed that Leveled Literacy Intervention is NOT effective, watch Steve Dykstra’s hilarious and brilliant analysis of this research here (skip to 52.33 on the video clock if you’re short of time).

3 thoughts on “Arrowsmith: the triumph of marketing over science”