Reading Eggs is a very popular early literacy program for young children, but to date I have not been much of a fan. Its logic has always seemed too Whole Language/Balanced Literacy. I didn’t include it in my Top Early Literacy Apps list earlier this year.

I was therefore pretty excited to hear that there is now a synthetic phonics version of Reading Eggs called Fast Phonics, and that it includes decodable books. I signed up for their 30-day trial (the sign-in options were “parent” or “teacher” so I tossed a coin and got “parent”), hoping to be able to enthusiastically recommend it.

It doesn’t seem to be available as an iPad app yet, so I logged in from my desktop computer. They have some good information about phonics here, though I wondered about the caption “ABC Reading Eggs uses a synthetic phonics method to teach children how to read” on what looks like an analytic/onset-rime phonics game: a “stamp” bowling ball with lanes labeled “ink”, “ump” and “amp”.

They also say there are “some words that cannot be learned by breaking them into smaller parts. Children must learn them by sight, and these words are known as sight words,” whereas we learnt from David Kilpatrick last year that all words, including irregular ones, are stored in long-term memory for instant retrieval by linking their spoken form (sounds and meanings) to their written form (letter sequences).

Reading Eggs Fast Phonics activities for littlies start with both upper and lower case letter S on the screen and say “Letter Ess” and then the sound /s/. The letters then animate into cartoon snakes, and the words “Super snake and silly snake” are spoken and appear on the screen. Then there are snowballs with various letters on them and you’re meant to throw the one marked “s” into a pile under the “silly snake”, to make a Yeti say “yeah”. It’s actually more fun to get it wrong, as then the Yeti cops it.

The same kind of thing happens for letter A, but the sentence is “Alligator ate an apple”. I’m not sure whether the authors know that “ate” starts with a different sound from “alligator” and “apple”. There’s a “find the sound” activity starting off with lower case embedded picture mnemonics, and fading the mnemonics over time, and introducing more letters. However, the mnemonics don’t seem to come back if you make mistakes. Their embedded picture mnemonic for letter X is “X-ray” (a sound-spelling relationship otherwise only found in the words “X-chromosome” and “X-rated”), but most of them look good and make sense.

“Letter Tee” is produced with a vowel after it: “tuh”, rather than a crisp /t/, and the voiceless sounds /h/, /p/ and /k/ are also incorrectly pronounced “huh”, “puh” and “kuh” at various times later on, and they add unnecessary vowels to /y/ and /w/ sounds. There are critters called “furballs” which made me think of the “hairies” in the high-quality phonics program Nessy. Hm. Kids have to match sounds to letters to put furballs in a catapult, with a ping-and-giggling reward for each correct answer. A furball blows a raspberry if you make a mistake. I wish software developers wouldn’t make it more fun to get things wrong than right.

After six activities introducing three sound-letter relationships, the program says “Letter sounds make words”, and “Words are made up of sounds”. I wish they’d ditched the first statement and completed the second one with “which we write with letters”.

Having taught three “letter sounds”, I expected these would be combined into the word “sat”, but the first word Fast Phonics blends and segments is “cat”. This time their voiceless sounds are nice and crisp, but they’re stop consonants. I wish they’d chosen an easier-to-blend-and-segment continuant for the initial sound.

Next they start segmenting and blending the words “at” and “sat” nicely, but then they introduce the word “as”. They seem not to know that the last sound in “as” is /z/. “As” is not a homophone of “ass”, which is another word for donkey, at least where I come from. If American children use this program I suspect there will be some more giggling at this point.

Next there’s quite a nice activity where one of the three words “at”, “sat” and “as” is spoken and the child has to click on its printed version, with the words repeatedly scrambled. Next they have to repeatedly find the word “at” from an array of five other words written on logs, most with new sounds/spellings and not easy to confuse with “at” (in, dog, along, go, cup, red, pen, man, sit, off, put, my, this, tap, the, did, run, pat, to, mug…) to build a fire for a Yeti. Then there’s a sound-letter matching activity, with /t/ again mispronounced, to make furballs pop out of trees and get a Yeti victory salute.

I nearly fell off my chair when I got to the 15th activity, because it’s exactly like a Nessy activity. There’s a bridge made out of a word, with a Yeti on a sled about to go across, and furballs on the other side, and a star scorecard at the top. Before the Yeti can cross, the bridge-word falls down, and the child has to reassemble it.

Compare this with a longstanding Nessy Hairy Phonics activity, which has a furry critter on a sled trying to cross a word bridge that falls down, and a smiley Yeti on the other side: 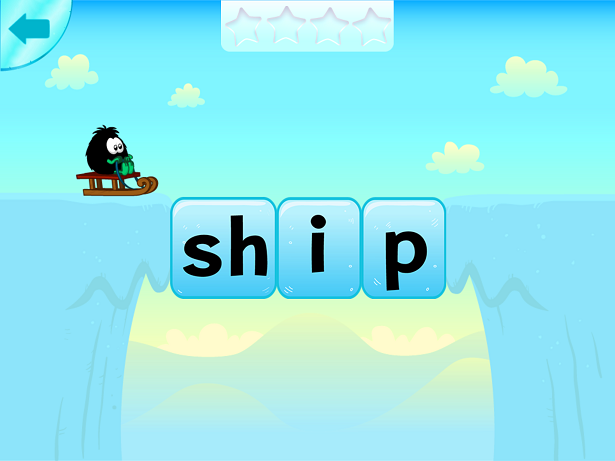 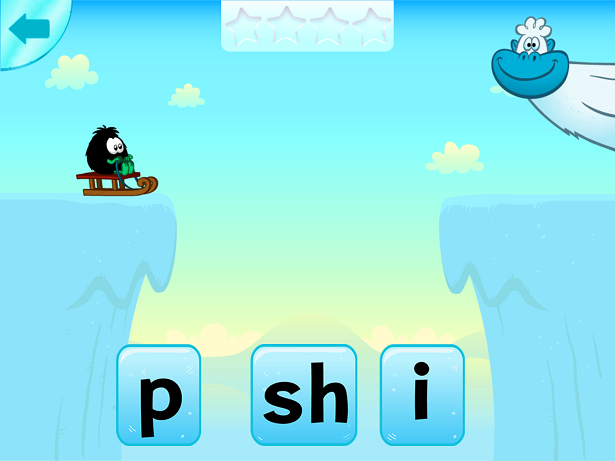 So at that point, I just went “nah, I’m out of here”, and turned off my computer and went to bed.