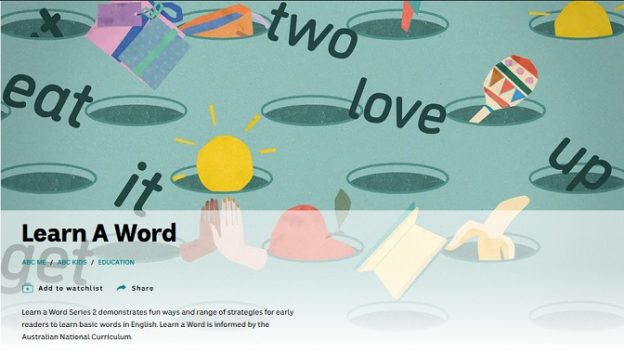 I don’t know who advises our national broadcaster on the content of its early literacy education videos, but I find them pretty underwhelming.

Please don’t show children in your care the Learn A Word series on ABC iView. It teaches children to rote-memorise the appearance of words, recite letter names, and “take a photo with your eyes” of words.

The sounds in words (phonemes) aren’t even mentioned, though awareness of these sounds is the glue needed to make letters and written words stick in memory.

The Learn A Word videos first say “Let’s all learn a word” and a written word appears on the screen. The first word is “after”.

“After. This word is after. Can you point your finger at the word after?

Now use that finger to write with me. Around and down, up and down, around and straight down, then across, from top to bottom then across. Start in the middle then back around, down, up and over. Ay eff tee ee ar. After. We did it! Let’s say it together. After!

I can use it in a sentence: After lunch I like to read a book

Take a photo with your eyes and remember this word: After

You just learnt a word!”

Then there is a pause, a new word is presented (the next word is “again”) and the whole thing repeats with much the same script. Well, I haven’t watched them all, as that would make my head explode with frustration, but I’ve watched quite a few, and they’ve been highly repetitive.

Even one-syllable, entirely sound-outable words like “up”, “at”, “it”, “if”, “on”, “get”, “run” and “from” are given this treatment. So are words with common two-letters-for-one-sound (digraph) spellings, like “them”, “good”, “boy” and “say“. Nobody points out that two letters represent one sound in these words, because nobody even mentions sounds.

The videos explicitly encourage a visual whole-word-memorisation strategy, e.g. for the word “it”, the video says: “put it in your head and say it for when you need it. It comes in handy all the time. It is a great word. It.” Here’s how this is illustrated: 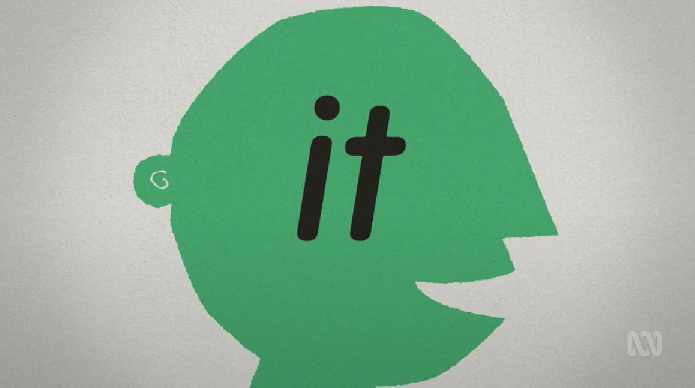 Occasionally children are encouraged to write words in the air, on their hands, arms, feet or the floor, very small or very big, very slowly or very fast. There’s music, pictures, and occasional giggling and sound effects.

Two-syllable words, and words with tricky spellings like the Greek-origin “ch” in “school” and the no-longer-pronounced Old English “w” in “two” get the same treatment. There’s no phonics teaching sequence, no patterns, nothing that would make sense to reading scientists, just rote visual memorisation, over and over.

I wish someone responsible for kids’ content at the ABC would read or listen to Emily Hanford’s reports, understand that a mountain of scientific research shows that we don’t learn to read by visually memorising words, and produce better content for Aussie kids. Maybe ABC presenter Dr Norman Swan can be asked to take this up, as he’s the patron of AUSPELD. Learn A Word on iView is simply not up to the ABC’s usual high standards.

« Here’s the video of my LDA webinar on spelling logic