Can children with intellectual disabilities learn to read? 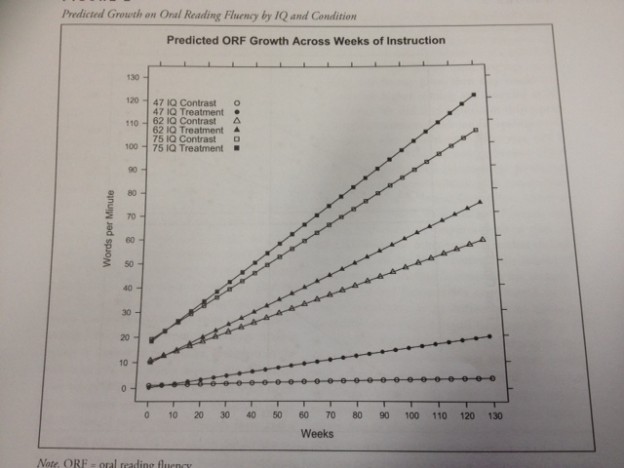 I'm sometimes asked whether my materials are suitable for learners with intellectual disabilities, and whether they can learn to read and spell.

Many learners with severe and profound intellectual disabilities don't understand much spoken language, and have little or no speech, so teaching them face-to-face communication, social, self-care and other skills are their families' highest priorities, and what ends up on their individualised learning plan.

However, I know learners with measured IQ scores in the 40s who have learnt to read and write simple texts (though I'm not sure their IQ scores were accurate), and there's no reason to think that someone with an IQ of 60 or more can't learn to read and write at least at a basic level.

What's the difference between someone with an intellectual disability and a slow learner?

The imaginary average IQ is 100, but of course the same person might score 105 on a good day and 95 on a bad day, so someone with scores between 85 and 115 is considered to have average intelligence.

An IQ below 70 is considered to indicate intellectual disability, but there are many children with IQ scores between 71 and 84 who learn more slowly than their classmates, despite no formal diagnosis, and thus no eligibility for extra support at school.

Learning depends on the learner, the program and the teacher. Learners with similar cognitive skills can achieve at very different levels.

Attention control and motivation are important – one teenager with an intellectual disability I worked with was desperate to read, and used to ask at the start of every session "Can we do reading?". He'd read our decodable books nonstop all lesson if myself and his integration aide didn't insist he do some writing/spelling and wordbuilding as well.

Learners with low IQs need an intensive, explicit, systematic program with tiny steps, and a skilled and persistent team. They take longer to learn than mainstream learners, sometimes a lot longer, so it's important to be able to measure and celebrate small gains.

Is scientifically based reading instruction effective for students with below-average IQs?

The journal "Exceptional Children" recently published an interesting article on this topic, called "Is scientifically-based reading instruction effective for students with below-average IQs?". The whole article is available online, via this website.

I've been ploughing through it with my highlighter pen and a furrowed brow at the statistics, occasionally shouting "Yes!" (it's OK, nobody else is in my end of the building today), because like here in Australia, many learners with low IQs in the US finish school with few literacy skills, and this doesn't get enough attention as a serious problem.

Like here, a lot of literacy research in the US excludes children with intellectual disabilities or children with low nonverbal IQs, and literacy programs for them often focus narrowly on training sight-word reading and letter-sound correspondences, and not much more.

This research took four years and studied 141 students with IQs from 40 to 80, with just over half doing a program called Early Interventions in Reading, and the other half doing a variety of programs chosen by their schools. Sometimes these were explicit, systematic programs like Corrective Reading, and sometimes they were not.

Research done over years in schools can be pretty messy, because a lot of factors can vary over time e.g. children changing schools and schools changing what they teach to the kids in the comparison group, but in general on most measures the learners doing the explicit, systematic program performed better than the comparison group. Progress was slower than for mainstream learners, and some learners really struggled with blending.

Shouting "Yes" to that, and putting the new little kid with a low IQ score on my list into as many literacy groups as possible.

8 thoughts on “Can children with intellectual disabilities learn to read?”