A colleague has just pointed out a YouTube video which I think perfectly makes the point that a little bit of phonics knowledge can be a dangerous thing.

It illustrates why we urgently need proper, linguistically accurate training for teachers and early literacy authors/publishers.

The video is called Geraldine the Giraffe learns schwa.  It seems to be from the UK, and it is being shown to at least some Grade Prep children (5-6 year-olds) here in Melbourne.

Geraldine the Giraffe is a puppet who, after some groovy music and a bit of chitchat, is told she will be learning about the “u” sound.

The letter “u” appears on the screen and she is asked to say the sound “u” (as in cup): 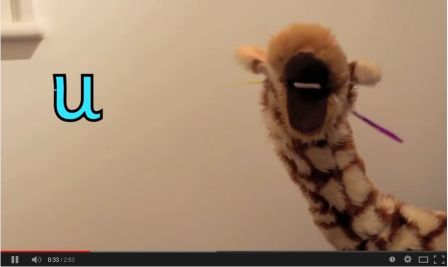 Then the narrator says, “Rather than learning about the ‘u’ sound with the U letter shape, we’re going to learn about the schwa, and the schwa is the name that we give to the ‘u’ sound in words using a different letter.”

Unfortunately, this is simply wrong. The sounds “u” as in “cup” and the schwa sound are two completely different sounds.

The narrator goes on to illustrate his point with the word “love”. 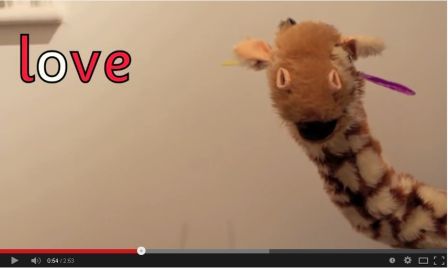 He says the word “love” has got the sound “u” in it (true) but it’s got an O in it instead (also true). And that the letter O is making the schwa sound in that word (false).

Geraldine obediently says “schwa”, then keeps saying it till she is told to “stop showing off”.

Next, Geraldine is encouraged to go off round the house and find something that has the schwa sound in it. She comes back with some chocolates. 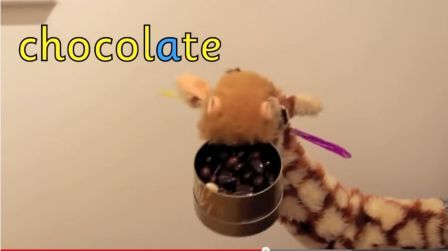 The word “chocolate” does indeed have the schwa sound in it. Depending on how you pronounce it, sometimes it has two. Only the first vowel is usually stressed in this word.

The other two vowels are pronounced in an unstressed way as the schwa sound, if the middle one is pronounced at all. My chocaholic sister keeps her chocolate in a box that looks like a bible, but the kids who come over have all worked this out and make a beeline for what they pronounce as “choclit”.

It is true that the unstressed vowel can be spelt with practically any vowel spelling (click here for relevant wordlists), but that doesn’t help learners with spelling.

Beginners should first learn all the other vowels and their main spellings in one-syllable words, and then how to apply these using their “spelling voice” to syllables that contain schwa sounds, by saying each syllable as it is written.

So when writing the word “chocolate” they should say “choc-o-late”, with the second syllable rhyming with “go” and the third with “gate”. Not try to learn dozens of different ways to spell what is essentially a little grunt.

Next Geraldine finds sugar, a pencil and a mirror, all of which do indeed contain the schwa sound, but she only offers one example of each type (mirror’s schwa is like the one in actor, author, doctor, factor, horror, major, minor, razor), so it’s not clear that there are patterns/groups here which are utterly teachable and learnable.

The word “sugar” is a particularly poor choice of word to illustrate what is a fairly common pattern (click here for some other words ending in an unstressed “ar”), because it has the sound “sh” spelt “s”. This is very rare, click here for the only words I can find with this spelling.

Many or perhaps most words of more than one syllable contain a schwa vowel.

If you’ve studied poetry you’ll know about spondee words, which have equal stress on both syllables, like “football”, “heartbreak” and “childhood”. They have no weak syllable, and thus no schwa vowel.

However, words with the following stress patterns often do contain the sound schwa:

Because we talk in sentences not single words, the vowels in many words are typically also reduced to schwas in connected speech.

This happens most to little grammatical words like “a”, “the”, “has” and “some”, leading to the annoying practice of children being taught that the word “a” is pronounced “u” and the word “the” is pronounced “thu”.

These words should only be pronounced this way in phrases and sentences. When we are teaching them as individual words, we stress the words, so we should teach the stressed pronunciation of the vowel (“ay” and “thee”). Otherwise children end up looking at both the letters “a” and “e” and saying “u”.

Anyway the moral of the story is that teachers need more training about sounds and spellings, so they can teach them really well and confidently, and know how to avoid teaching children things that are wrong and/or unnecessarily complex.

I will be hosting the Sounds~Write training here in Melbourne on 19-22 January to help achieve this, so if you’d like to attend or want to suggest it to a teacher you know, please let me know and I’ll send you the registration form.

We have deliberately made it very affordable at $660 for four days, and attendees should go away with sounds and letters and a teaching sequence clear in their heads, and lots of resources to use straight away with learners of any age.

The other moral of this blog post is that people making early literacy materials who don’t have a good understanding of the phonemes, graphemes, morphemes and stress patterns of the language should also seek training or at least advice/feedback from someone who has this knowledge, before they let their resources loose on the internet. Having fun and meaning well is not enough.