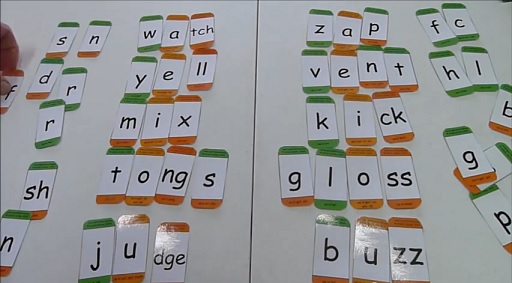 Please note that as of July 2019, the games in this post have been superseded by the ones you can find in this blog post.

It’s been pouring for most of today here in Melbourne, so I’ve been feeling sorry for everyone stuck indoors during the summer holidays. On the plus side, this has motivated me to finally stop obsessively polishing my four new word-building card games, and make them available here.

These games are designed to help learners practice their blending and phoneme manipulation skills, and to learn how to use and combine a variety of graphemes (spelling patterns) representing individual phonemes (speech sounds) in English.

You can find fairly detailed descriptions of each game in each one’s entry in my website shop, so I’ll just put little videos about each one plus a summary in this blog post.

Here learners build words using single-letter vowel spellings, and consonant spellings including “ck”, “ng”, “ff”, “ll”, “ss”, “zz”, “x”, “tch” and “dge”, “sh”, “ch” and “th”. This game also provides lots of opportunities to learn which consonant combinations (blends) are typical of English, such as “fl” and “str” but not “vm” at word beginnings, and “nch” and “mp” but not “jn” at word endings.

This game practises a variety of two, three and four-letter vowel spellings used in word middles, including “r-controlled” spellings. It also lets learners practice the consonant spellings that often combine with these vowels, including “ce” as in “voice”, “ge” as in “large”, “se” as in “house” and “please”, and “ve” as in “curve”.

Printing and assembling the games

These games are available as downloadable, printable pdfs. Once you’ve downloaded each one, print it on two A4 pages, laminate it and cut it into cards, rounding off the corners. This might be a good rainy-day scissor skills activity for kids.

If you’re going to print all the games, I suggest using different coloured paper for each one, like this:

Then if the cards get mixed up in a toy explosion, as often happens during rainy holidays, it’s easy to work out which ones belong to which game.

These games fit neatly in the little metal tins chewing gum and sweets often come in these days:

There are game title and instruction cards in each deck, which can be taped as labels on these tins, with the whole arrangement most satisfyingly combining two of my life’s obsessions, spelling and recycling.

The games cost $4 plus tax each if purchased separately, or $12 plus tax for all four. I hope you like them.