Hundreds of interventions are available for kids with communication, learning, attention, social, memory and/or behaviour difficulties. Some are also used to hot-house these skills in typical kids.

Sorting effective interventions from snake oil can be tricky enough for professionals, but a minefield for parents.

Testimonials are much easier to understand than research data. Confident sweeping statements by charismatic sales-folk with magnificent hair seem more persuasive than the usually tentative-sounding statements of scientists. The promise of a miracle cure sounds more appealing than a proposal to work hard for years building skills.

To add to the complexity, professionals who should know better sometimes promote treatments lacking good evidence, or fail to speak up when colleagues do. Respectfully challenging a colleague can be difficult.

Those promoting questionable interventions sometimes make legal or other threats when publicly challenged, which can also have a silencing effect. Silence is easily misinterpreted as agreement.

Hooray, therefore, for Pamela Snow and Caroline Bowen’s important book, “Making Sense of Interventions for Children with Developmental Disorders: A Guide for Parents and Professionals”. Here’s a picture: 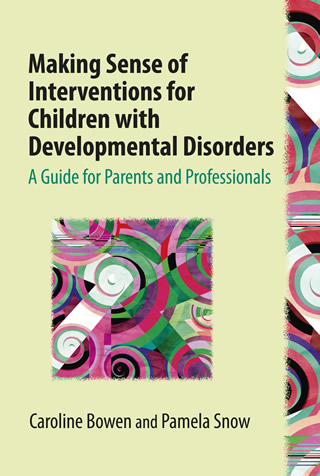 Pam and Caroline have long helped lead and inspire Australian Speech Pathologists and related professionals, and readers of this blog might also read Pam’s The Snow Report. I had put in an advance order for their book long before being asked to review it, and writing a review was always the plan, so I was pleased to agree and accept a review copy (sorry getting it actually done has taken so long, Pam!).

It’s never patronising or superior, but this book has many entertaining moments as it takes us on a tour of the world of infant hot-housing, made-up conditions (Gameboy Disease!), pseudoscience and neuro-flapdoodle, as well as “could try harder” interventions and those based on solid evidence.

To give you an idea of the terrain the book covers, the 12 chapter titles are:

I’ll focus now on Chapter 9, as it’s most relevant to readers of this blog, but the other chapters are organised similarly, starting with general principles and then working through key issues and common interventions.

We start with the big picture: reading consists of two key skill-sets: decoding and comprehension. Decoding is how we get words off the page, so that we can use the same language comprehension skills used for listening to understand their meaning. While English sound-letter relationships are complex, there are strong patterns, and only about 4% of words are truly irregular.

Reading interventions with the best evidence systematically teach awareness of sounds in words (phonemic awareness), spelling patterns (phonics), vocabulary, comprehension and fluency. Interventions based on the (false) idea that reading is a skill that develops naturally typically lack adequate focus on phonemic awareness and phonics.

Children are often asked to visually memorise lists of high-frequency words, but this is not an efficient use of their time or mental resources. The debate surrounding the use of the term “dyslexia” is summarised and the authors conclude that struggling readers need early, effective intervention, whether they have a formal dyslexia diagnosis or not.

Both authors have worked in both health and education, so are able to compare prevailing attitudes to research findings in these sectors, concluding that “we can reasonably expect that there is an evidence-informed line of thinking behind decisions about our healthcare”, but that “a worrying degree of debate persists in education circles about the extent to which teaching should be informed by empirically-derived principles”.

They discuss the evidence available for a number of popularly-adopted programmes: Reading Recovery™, the Arrowsmith Program™, Cellfield™, Fast ForWord®, Interactive Metronome™ and Coloured Lenses/”Irlen® Syndrome” as well as Behavioural Optometry approaches more generally. All are found to lack convincing evidence, you’ll have to read the book for the details.

Orton-Gillingham approaches like Spalding/the Writing Road to Reading and Alphabetic Phonics are described as having many features that align with the current research, particularly in linking language and literacy, using systematic synthetic phonics and teaching about word structure and derivation. However, they may over-emphasise teaching phonics rules, and “multisensory” activities used in these programs like writing letters on a roughened surface and forming letter shapes with one’s body lack good evidence. As Orton-Gillingham is actually multiple different programs, its evidence-base is thus described as equivocal.

Lindamood-Bell® programs like the ADD or LiPS® program and the Seeing Stars® program are also described as containing many sensible, evidence-based components, but again including non-evidence-based “multisensory” activities. Some of the theoretical explanations for reading difficulties used in Lindamood-Bell programs (e.g. weak symbol imagery and/or weak concept imagery) are also unique to these programs, not derived from cognitive science research.

Warning signs that a program is probably not evidence-based include: testimonials and stories about personal experience used in marketing; “neuro/brain-based” language; symbols like ™, ® or © in the program name; and/or claims it is effective for a wide range of difficulties; but a notable lack of information about where to find research supporting these claims  published in peer-reviewed, reputable journals.

Bowen and Snow say the program Toe By Toe appears to apply evidence-based principles, but again include a “multisensory” caveat. They endorse the MultiLit program and associated MiniLit, InitialLit and MacquLit programs as being based on sound, readily-accessible evidence.

In general, they advise working directly on skills that have been assessed as areas of difficulty, e.g. phonics and handwriting if decoding and spelling are the main areas of difficulty; comprehension if this is the main area in which a child is struggling. Not spinal manipulation, special diets, balancing on one leg, memorising clock faces or anything other than actual reading or spelling.

Gold standard research is difficult and expensive to do, so it’s not surprising there are many widely-used interventions which Bowen and Snow say “could try harder”  in the research department. I draw on some of them myself – PECS, Social Stories, TEACCH and Hanen – when working with children on the Autism Spectrum. This book made me even more conscious of the need to keep checking for new evidence and better approaches, and wish it were easier for clinicians to access journals, and to incorporate research into clinical practice.

I’d never heard of many of the 170-odd (some odder than others) interventions listed on their “No Convincing Evidence” list on p339, but what a terrifically handy reference list to have! Thank goodness nothing I use appears on it, though I have used Fast ForWord™ with children with low receptive language skills, initially when it was being researched at our Royal Children’s Hospital, and well before it started being marketed for a vast range of difficulties.

I was a little surprised to find the Wilson Reading System® on this list, I must ask them about that, and very disappointed not to find camel’s milk as a cure for Autism. I guess they had to draw the too-obviously-silly line somewhere.

This book should be made available to parents of children with developmental disorders via public libraries, as it has the potential to save them a lot of grief, time and money finding effective interventions, and avoiding ineffective ones.

It would also be a valuable addition to paediatric and allied health professional libraries, and to the libraries of schools educating children with developmental disorders, which means most schools, I suppose.

In Australia, this book is available from Sandpiper Publications.