So I’ve decided to write a blog about each video, summarising what I think are the key points, and recording the time on the video clock each is made, to assist those skimming to find topics of interest. I hope people will then be motivated to go back and watch the whole thing.

The videos’ presenter is Dr David A. Kilpatrick, a US school psychologist turned academic, whose book “Essentials of Assessing, Preventing and Overcoming Reading Difficulties” also explains these concepts (no, I’m not on his marketing team, it’s just a good book, my copy is very dog-eared).

The first video is about preventing word reading difficulties and intervening with those who struggle. Here it is, if you just want to watch it yourself straight-up. My summary is below, numbers in brackets are video clock times, and any oversimplifications or misrepresentations are my own, my apologies. If you see something you think needs fixing, please tell me.

How we remember the words we read: orthographic mapping

In the 1970s and 1980s Linnea Ehri developed her theory of how we remember the words we read, via a process called orthographic mapping, which bonds the sounds in spoken words to their spellings. This theory is constantly cited in the reading research.

In 1994 some researchers including Snowling and Hulme tested out Ehri’s theory in three airtight studies, and found that (as far as anything ever does in science) it stacked up very well. Then in the early 2000s, Torgeson called it our best theory to explain skilled word-level reading.

However, Ehri’s theory hasn’t had much traction in education, or in other areas of the reading research, perhaps due to professional silos and the complexity of the theory.

Orthographic mapping is quite a hard concept to get your head around, and it seems that people have often cited Ehri without really understanding her.

But when you read thousands of research reports through the lens of a really good theory, things start to tie together.

How to reduce reading failure by 75%: understand the research

(5:34) The schools where Kilpatrick was working had been doing Reading Recovery, and not getting great results, but then switched over to intervention consistent with Ehri’s theory, and within five years reduced reading disabilities by 75%.

Once teachers understood the theory, they changed their teaching, and got great results. Our prevention and our intervention has to be based on how reading works.

(8:00) Phonemic awareness and blending matter for how well you can read. Rapid Automatised Naming (RAN) also matters, but even the best researchers in the field aren’t really sure why – whether it’s a separate cause of problems, a consequence of the phonological core deficit, or related in some other way.

(9:50) Phonological memory (the passive, temporary buffer in which we store whatever we just heard for a few seconds) and working memory (our mental workspace) also matter for reading, and both are phonological in nature, but whether problems in these areas are also symptoms of the phonological core deficit, or related in some other way, is also unclear.

(15:20) What we do know is that visual memory is not how we read. We read based on orthographic memory. We don’t read by guessing from context. When you combine sounding out and set for variability (the ability to determine correct pronunciations from incorrectly pronounced words) you can get a lot of unfamiliar words, you don’t need to guess.

(16:00) Orthographic mapping is how we learn new words, and thus is true of words with both transparent (regular) and opaque (irregular) spellings. Kids who are good readers are good orthographic mappers. Kids who learn to orthographically map can close the gap between themselves and their peers.

Written words are anchored mainly to their sounds, not their meanings

Second language learners and young children thus have a much larger store of words in their phonological LTM than their semantic LTM. Research by Kate Nation and others has shown that the main anchor point for learning new written words is whether the word is in phonological LTM, not whether it is in semantic LTM.

(23:40) Yes, concrete words are remembered a little more easily than abstract words, so semantics does play a role, but the main way we get written words into long-term memory is by anchoring them in their sounds, not their meanings.

When you have phonemic proficiency, words pull apart into their component sounds automatically, and link to letters/spellings without any need for conscious effort. These skills have become automatised.

Regular and irregular words are mapped the same way

Learning phonics helps with the mapping process, as it makes sense of the words that don’t have transparent relationships between sounds and letters.

(31.50) We used to assume that phonics was good for figuring words out, but that after you’d seen a word a few times, you just started to remember it through visual memory. This is simply not true. We make the connection through mapping, and mapping is easier if you know how the letter patterns work.

Most irregularly-spelt words only have one sound spelt an unusual way, and the rest of the word is spelt pretty normally. In our relatively opaque spelling system, we need to make adjustments all the time, it’s just that some are common adjustments and some less common. The mapping process doesn’t distinguish between regular and irregular words.

However, if you are a child who doesn’t remember words efficiently, reading practice is of very little benefit. First you have to develop phonemic and letter-sound proficiency, so that you can start orthographic mapping, and thus benefit from reading practice.

If you’re a child who DOES remember words, reading practice is essential, and the only thing that will make you a better reader.

Put this chart on your wall 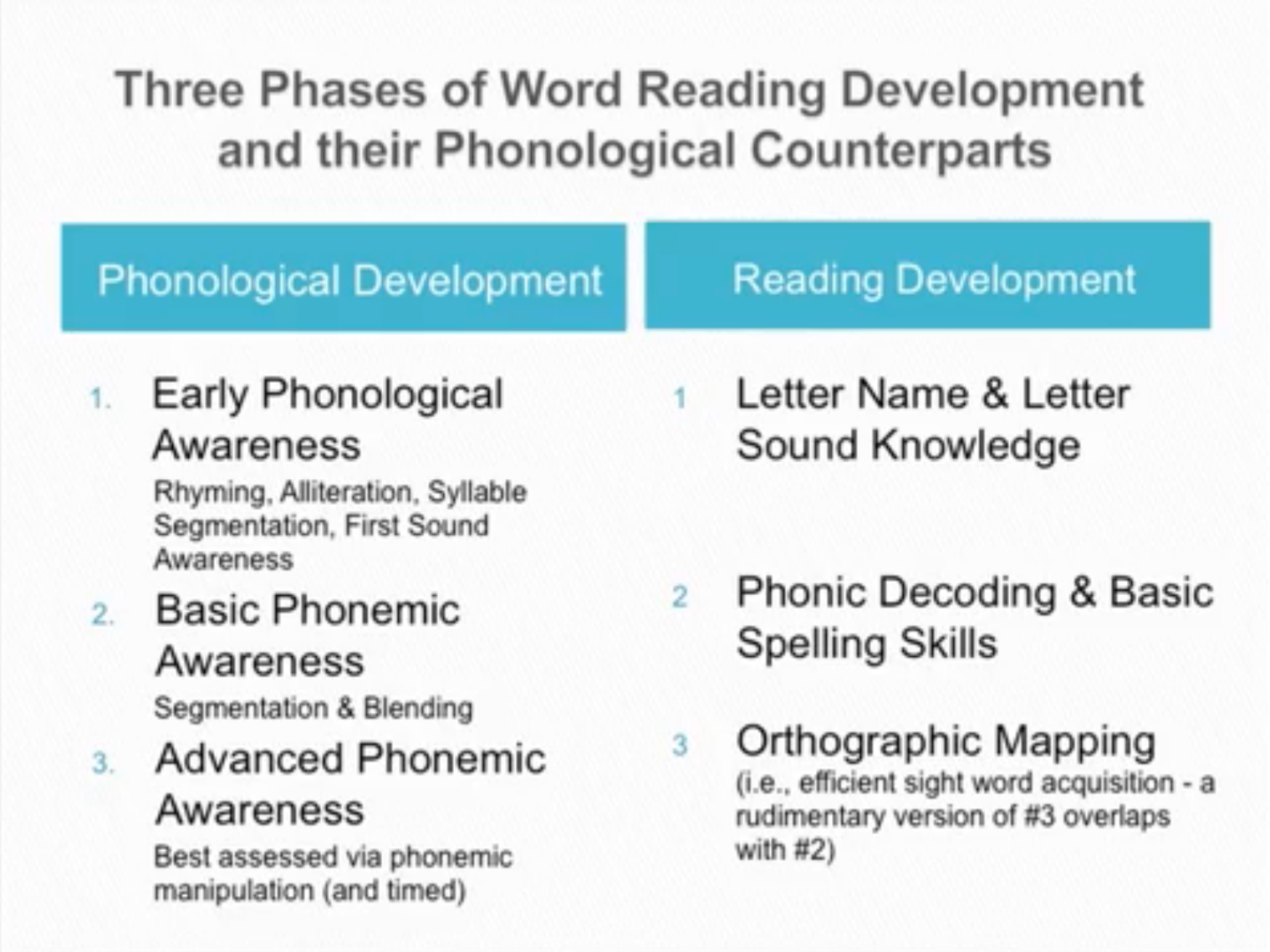 The things on the left-hand side of this chart are hard to observe, and in typical children happen naturally as part of the process of being taught to read and practising reading and spelling. However, they do not occur naturally in children with the phonological core deficit. The right side skills are the ones that are easier to observe.

If you’re using the CTOPP test to examine skills on the left-hand-side of this chart, the blending test usually tells you nothing after about second grade, as by then most children can blend, it’s the elision test that tells you whether they have the advanced phonemic awareness that will allow them to start orthographic mapping. This skill usually starts in late second or early third grade, and leads to phonemic proficiency.

(48:50) If we teach all young children phonemic awareness and explicit letter-sound skills, all kids improve their reading performance, on average by about eight standard score points (on standardised tests, where the average is 100 and the average range is 85-115).

The whole group does not retain this gain over time, it drops down to about four standard score points, because typically developing kids develop phonemic proficiency no matter how you teach them.

However, the weaker/at risk kids do gain about 13 standard score points. This increases to about 20 standard score points over time. So there was a well-sustained benefit to the bottom third of children. So it’s very important to teach this way in the first two years of schooling.

If we keep using current early literacy teaching approaches, the bottom third of kids will stay at the bottom. As Mark Seidenberg says, we’re teaching all kids to read like weak readers, by guessing, and only using their linguistic skills as a backup.

(52:30) One interesting experiment used an unfamiliar alphabet to write familiar 3, 4 and 5-letter words, and taught typical kids to read the words via whole word flashcard teaching. They never told them what the letters were. Then they gave them brand new words made up of these letters with the same sound-letter relationships, and found the kids could read them because they had worked out the sound-letter relationships. That’s how alphabetic writing works, and that’s the only way we can read words.

Only between 2% and 5% of children should be struggling

(54:27) Another piece of research took children who were at the 18th percentile and below and divided them into three groups. They were all doing three-cueing systems-based intervention.

One group were taught in classrooms with explicit direct teaching about sounds and letters. Another group had this classroom teaching embedded in word-family activities, which is OK as a starting point/early crutch, but doesn’t make sense if continued. It’s sounds and letters that matter for decoding. A third group had only implicit and incidental teaching about sound-letter relationships.

The kids taught explicitly and directly had standard scores averaging 96 (right in the middle of the average range) compared with 88 and 89 in the other two groups.

(59:48) American educational journals are now not publishing studies showing that explicit teaching of phonemic awareness and phonics is the best way to teach kids to read, because they think it’s a settled issue.

In 2008, UK researchers Shapiro and Solity published a study that showed that explicit, systematic teaching of phonemic awareness and phonics left only 5% of children struggling, whereas business as usual teaching left 20% of children struggling. So they had a 75% reduction in reading problems based on several minutes a day of phonological awareness instruction and letter-sound instruction.

(1:01:00) The key to successful teaching is the combined teaching of phonemic awareness and teaching of phonics, not just teaching more phonics. Once kids can sound out nonsense words, they have enough phonics. Teaching in both areas must also be systematic, as non-systematic instruction is no better than no instruction. Systematic means, “I have a plan, it’s going to start with easier developmental things and work up to harder things”.

The length of teaching time required is something that varies between studies. One study did seven weeks in kindergarten small groups, four days per week, and this had huge preventative benefits. Others did a whole year. Some groups worked at the pace of the weakest kids, so more able kids were able to do tasks easily, and enjoyed this, but at the end of the year all the kids had the skills they needed, and nobody was left behind.

(1:06:54) The key components that make preventative teaching effective are phonemic awareness, teaching about letter-sound relationships, and reading connected text. However the National Reading Panel’s conclusion that studies using letters to teach phonemic awareness had better results than ones that didn’t use letters is misleading, if you go back and look at the original research.

The other two videos in this series are below, in case you want to watch them before I get around to summarising them for blog posts.