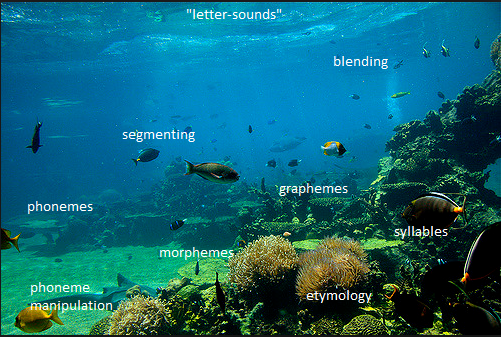 My last blog post copped a little flak for its focus on the Victorian Education Department’s top two pieces of advice for parents when their children are stuck reading a word, both of which start with the sentence, “Look at the picture.” (see p14 of this document).

This is very bad advice because it directs children’s attention away from the key information required for good word-level reading. It’s based on the idea of multi-cueing/the three-cueing system, which is scientifically-debunked nonsense. A complex but excellent explanation of why can be found here, and the actual role of context in reading is explained well here.

To read an unfamiliar word, children need to take it apart into spellings (graphemes) e.g. “n”, “igh” and “t”, not “ni”, “g” and “ht”, associate these with the relevant speech sounds (phonemes) and blend them into a word. With practice, familiar words are unitised in memory, via a process called orthographic mapping, and no longer need to be sounded out, they become instantly recognised.

Unfamiliar words of more than one syllable must be sounded out a syllable at a time. Earlier syllables must be held in memory while later syllables are worked out, making long words harder.

Once a printed word is converted into a spoken word, its meaning can be accessed, if it’s known. But even if a child doesn’t yet know what a word means (i.e. it’s not yet in their semantic memory), having heard it before (i.e. having it in their phonological memory) kick-starts the process of putting it into long-term memory for instant recognition. Over time the child can learn and refine its meaning(s), and how to use it, by hearing and seeing it in use.

Kids who have heard eleventy million words, because their folks are always chatting with them and reading them stories, are thus at a big advantage when it comes to learning to read new words. Lots of words ring little bells in their phonological memories.

I like to imagine phonemically aware learners’ brains as having phoneme suckers that seek out and latch onto graphemes, noticing their locations and neighbourhoods, and stash them away for future reference. Brains that are unaware of phonemes, and constantly distracted by pictures, cannot gather this vital data.

My last blog post was criticised for not including the full list of departmental advice for parents on helping children work out difficult words, which in fact does include some sounding-out suggestions. Here’s the full list: 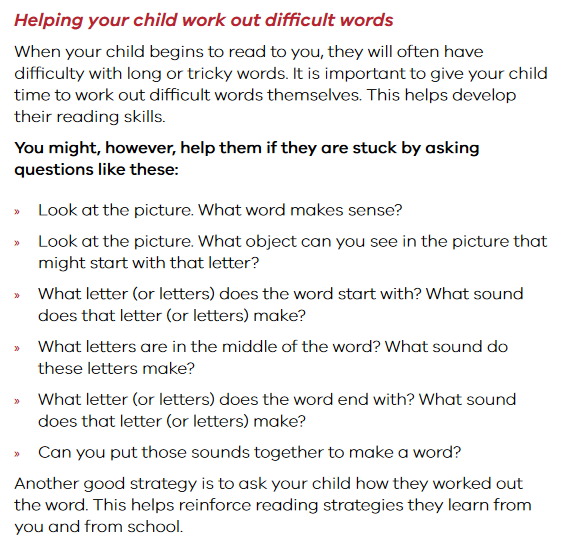 The main reason I didn’t write about bullet points 3-6 is that I was writing about points 1 and 2. Not every blog post has to be about everything. Also, I found points 3-6 a bit underwhelming, and didn’t really know where to start. They seemed like a fairly shallow, token effort at sprinkling phonics on the same old stale Whole Language cake.

Book choices that set children up to memorise, guess and fail

The first problem with the above working-out-hard-words advice is the books to which it is typically applied.

Beginning and struggling readers are usually encouraged to read two kinds of books:

Letting beginners and strugglers choose books for adults to read aloud to them is great, I’m all for it. Take them to a kids’ library or bookshop and let them go mad ape bonkers choosing books about dinosaurs, unicorns, underpants, wild rumpuses, quidditch, whatever they like. Read these books aloud to them, have fun together, and build their vocabulary, listening and narrative skills, and world knowledge.

Giving beginners and strugglers open slather choosing books to read themselves sets them up to fail. They can be expected to constantly trip over words with sound-spelling relationships they’ve never been taught, and syllable structures they don’t know how to manage.

Call me old-fashioned, but encouraging vulnerable children to do difficult things they’ve never been taught to do seems kind of mean.

Beginners and strugglers should be reading books that contain the sound-spelling relationships and syllable structures they have been taught, and few words (<5% of words) they can’t decode or haven’t been pre-taught as key, high-frequency words with an unfamiliar spelling or two.

Teaching a child that the letter “e” represents the sound /e/ as in “red” and then encouraging her or him to read books containing words like “are”, “come”, “her”, “great” and “cafe” is like handing over a pair of children’s scissors and encouraging him or her to cut paper, cloth, vegetables, pizza, wood, wire, fur and fingernails. Dumb, unkind and potentially dangerous.

Luckily there are heaps of decodable books available, I have two cupboards full of them at my new office in North Fitzroy. If you’re in Melbourne and want to look through them, let me know (she said, wondering if that might create a lot of unexpected work, but hey, enthusiastic people seeking information about decodable books can only be a good thing).

The second main problem I have with the Ed Dept booklet’s sounding-out advice is that it seems like token, generic, shallow phonics that often simply won’t work.

If you ask a child trying to read a word, “what letter(s) are at the start/middle/end of that word?” they will usually tell you a string of letter names. If the word is “elephant” they’ll say things like “ee”, “aitch” and “tee”. These don’t help you figure out the word, so this is just wasting time.

If you ask a beginning or struggling reader, “What’s the first sound? What’s the middle sound? What’s the last sound? Can you put those sounds together to make a word?” and the word is “cat”, great, these questions are helpful and they’ll probably get the word right. But if the word is “chant”, “craft”, “cabaret”, “combatant”, “concealment” or “conversationist”, the answer might justifiably still be “cat”.

Asking about plural letters rather than a single letter might help in one-syllable words if the child knows relevant digraphs and how to blend any adjacent consonants. If the word has more than one syllable, this still probably won’t work. The word “syllable” doesn’t appear anywhere in The Education State’s Literacy And Numeracy Tips To Help Your Child Every Day, which makes me think this booklet belongs more in the shredder than the Prep bags.

Even the question “What sounds do those letters make?” is baffling to many young children. Dogs make barking sounds, guitars make musical sounds and people make speech sounds. Letters are marks on the page. They don’t make any sounds. If you put your ear up really, really close to a page and listen as hard as you can, you still won’t hear anything.

Instead of “the sounds of letters”, children should be being taught about “the spellings of sounds”. This is not just being pedantic. Teaching from letters to sounds is working from the unknown (print) to the known (speech). Any teacher can tell you that’s the wrong direction. Teaching which starts from letters obscures the main underlying logic of our writing system, which is that speech sounds (phonemes) are represented by spellings (graphemes).

Once children understand this logic, have been taught about a few speech sounds and the letters that most commonly represent them, and can blend two or three sounds into words, they can be given books containing short words made up of these sounds and asked to “say the sounds and make the words”. There’s no need for irrelevant, confusing or verbose questions.

Today’s best explicit, systematic synthetic phonics programs go much further than say-three-sounds-and-blend, cat-sat-on-the-mat type phonics. They gradually add more sounds and their spellings, put these into different kinds of words, highlight homophones (e.g. “see” and “sea”), homographs (“he moped around” v/s “she rode a moped”) and shared spellings (e.g. “ch” in “much”, “school” and “chef”), teach about syllable types and syllabification, and build words from meaningful parts. They include work on vocabulary and word structure/morphology, and often some etymology, so are perhaps better described as word study programs.

“Just do it, and then explain to me what you did”

The last part of the Ed Dept booklet’s advice for parents on helping your child figure out difficult words is an inquiry-based mumbo jumbo classic: “Another good strategy is to ask your child how they worked out the word. This helps reinforce reading strategies they learn from you and from school”.

How this helps a child work out a difficult word remains unclear. What if they can’t? It’s like telling parents, “We don’t actually know how children learn to read difficult words, so just ask them to do it and then explain to you what they did”.

I should say loud and clear at this point that my concern is with the prevailing dominant system for teaching beginners and strugglers to read and spell, and not with teachers. Teachers are in my experience fantastic people who always do their best, but too many have not been taught how to help their weakest readers/spellers, because universities mostly fail to teach teachers relevant linguistics (phonology, orthography, morphology) and key reading science.

We don’t expect carpenters, dentists or pilots to reinvent their own tools or methodologies, and we shouldn’t expect teachers to make up early reading and spelling curricula on the fly, usually from a mix of things that are known to be effective and things that simply aren’t. If you haven’t read Pam Snow’s blog post on the appalling instructional bricolage of Balanced Literacy, do it now.

Every primary school should have an established teaching sequence for sound-spelling relationships, which would allow parents to get sensible answers to questions like “When will my child be taught about the ‘igh’ in ‘night’?”. If a Principal can promptly answer this question along the lines of “Grade 1 term 3”, and the school seems to offer everything else that matters most, my suggestion would be “enrol your child at once”.

The spelling patterns in home readers in the first couple of years of school should reflect this teaching sequence, so that nobody is set up to fail, and nothing is left to chance. This would save early years teachers a lot of planning and preparation work, and their middle and later years colleagues a lot of time and effort differentiating curriculum. At the moment teachers are often not sure which phoneme-grapheme correspondences their students have already been taught, which ones they need to cover, and which will be taught by later teachers.

Parents should be told about the difference between books to read to beginners and strugglers (anything G-rated they like), and books for beginners and strugglers to read themselves. The latter should be provided as home readers by the school, and literacy advice to parents should reflect the child’s current stage/learning intention e.g. how to help a child blend adjacent consonants, learn vowel digraphs or break words into syllables.

I hope one day education bureaucrats will be more interested in putting decodable books in Prep bags than glossy documents suggesting a dog’s breakfast of literacy strategies, some of which are downright unhelpful.

16 thoughts on “Shallow and deep phonics”