After my last blog post about the new Reading Eggs – Fast Phonics program, its activity that looked exactly like a Nessy activity suddenly got new graphics. Then someone asked me why I’m not a fan of the original Reading Eggs program when it includes a lot of phonics, so I decided to take another look.

With hundreds of new COVID-19 cases daily (yeek) and a new face-masks-in-public rule, my state is heading back into another protracted period of home-based learning, probably including lots of e-learning. I want children to use programs that maximise their chances of successfully learning to read and spell.

Is Reading Eggs from the ABC?

I used to think that Reading Eggs was owned by the Australian Broadcasting Commission, because it uses the ABC logo.

Incorrect. Reading Eggs is owned by a company called Blake e-learning. It uses the trusted ABC name and logo in Australia under a retail partnership with ABC Commercial. The Reading Eggs site visible outside Australia, https://readingeggs.com, has no ABC logo (it quickly redirects Australians to the Australian site).

The ABC Commercial website says, “As an iconic, trusted brand, we are the only Australian distributor equipped to maximise the rights and opportunities across all product categories to help drive your business.” As a member of Friends of the ABC I was pretty surprised at that.

How should early reading and spelling be taught?

Beginning readers/spellers need be told from the very start that spoken words are made of sounds, which we write with letters. This seems obvious to literate adults, but is not at all obvious to young children, or many older learners. I once told a smart, illiterate teenager who’d had ten years of Australian schooling this fact, and he asked: “Why didn’t anyone tell me that?” (if you don’t know why, read journalist Emily Hanford’s reports or watch/listen to her recent PATTAN network talk here).

The sounds in our speech are invisible, quick and smoosh into each other, so splitting them up in order to spell them is hard. English is a mishmash of languages, warped over time (the wonderfully nerdy History of English podcast has details), so our writing system relates 44 speech sounds to 26 letters using five different types of logic:

Reading and spelling software for young beginners should stick to the simplest logic (#1). It should focus on teaching children to break up spoken words into sounds and write them with letters, and read words by saying a sound for each letter then blending the sounds together.

Like all good systematic, explicit, synthetic phonics programs (see examples) this software should start with just three to five sounds, represent them with single letters, and teach kids to use them to spell and read little words e.g. am, at, it, sat, sit, sis, mat and perhaps names like Sam, Sim, Tam and Tim.

Note that the words “is” and  “as” don’t follow logic #1, as their last sound is /z/ (logic #4). Including them might confuse some children and undermine logic #1, so if they’re included they should be explained e.g. “at the end of words we often say /z/ for this letter”.

Extra sounds and their spellings should then be gradually, explicitly, systematically introduced and practised to mastery in short words (two or three sounds). Words can then be made longer e.g. with two consonants together as in “clip” and “tent”, then three as in “split” and “helps”, as consonant combinations can be quite hard to segment and blend.

This gives beginners a solid foundation for learning the additional sounds and remaining logic and patterns of our complex spelling system.

How does Reading Eggs stack up?

Reading Eggs offers a free trial period, so anyone can sign in and see the following things for themselves. It first introduces “the sound m, like in mouse” and presents the lower case letter m for children to click on to hear /m/ (I’ll put sounds in slash marks). There’s just letter m at first, and then children must discriminate it from two other letters. There’s no need to link sounds and letters in this activity, so it can be done using visual memory (not the kind of memory used in reading, see this blog post).

The program then asks “which picture starts with the /m/ sound?” and there are two pictures on screens e.g. “moss” and “sat”. I pretended to be a child without any awareness of sounds in words, and answered randomly. When I got it wrong, there was a “boing” sound with zigzags on the screens and I was told to “try again”. When I got it right, a cartoon character said a (less interesting) “yes”. No matter how many times I got it wrong, no help was offered. Eventually, thanks to having a 50-50 chance, I fluked it and went up to the next level.

I was then asked to “find /m/ in these words”, and printed words containing the letter “m” appeared the screen, but the words were not spoken, so again visual memory was all I needed. The words included digraphs (“moon”), split vowel digraphs (“time”) and two-syllable words (“metal”), examples of spelling logic #2 and #4.

When I clicked randomly I was told to “try again” till I eventually fluked enough correct answers. There was a song about words with “m” in them. The words flashed on screens with the letter m in a contrasting colour. To preliterate children, they probably look like chicken scratchings.

Next I was told to “complete the dot to dot to make the letter”, and there were numbered dots on the screen in roughly this layout: 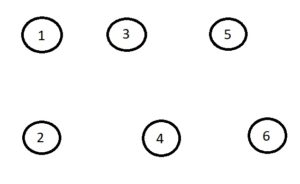 I pretended I hadn’t learnt my numbers yet, and clicked randomly. I got three “boing” sounds and three red crosses on the screen, and then was asked “again?”. This happened no matter how many times I got it wrong. When I clicked on the dots in numerical order, the lower case letter “m” was filled in between the dots, and I was asked to do it faster. I hope a handwriting expert can tell us in the comments whether this sort of numbered-dot-clicking is a good way to teach early letter formation.

Next came a 6×6 letter grid with six copies of the letter “m” in it, in slightly different fonts, and including visually similar letters like “n”, “h” and “w”. I was told to click on /m/. When I made mistakes I got red crosses and “boing” sounds, and after three errors was asked “again?”, but the game did not adjust to my confusion by reducing the number of choices, providing hints or otherwise helping me.

I was then shown a letter “m” and told “This is the letter em, it makes the sound /m/’. Capital em looks like this (M), it also makes the sound /m/”. Preliterate me wondered why we have two letters for the same sound, but this wasn’t explained. A 6X6 grid like the previous one appeared, this time with capital letters, and again if I couldn’t find the M’s, the task was not simplified, I just went round and round being asked “again?” till I fluked it.

Next I was shown a letter “m” in a book and asked to click on the picture that begins with /m/. With only two pictures presented at a time, I had a 50-50 chance. The picture names were not spoken unless I clicked on the speakers next to them, and when I made three mistakes I had to go back to the start. There was no slowing down or stretching out of spoken words, or other explicit assistance with making the connection between the sound in words and the letter.

Next I was shown a screen arranged like this, and asked to drag the words to the pictures: 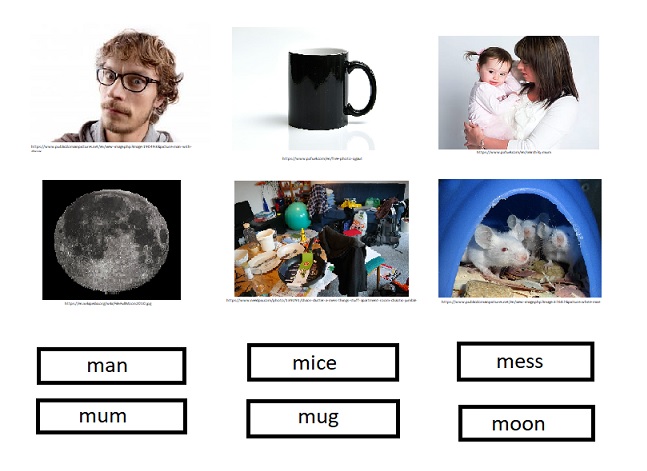 So far in this program kids have only learnt one letter, so can’t read the words, but that doesn’t matter because you just click on the words and they’re spoken, so all you need to do is match spoken words to pictures. You can just ignore the written words, and since reading them requires logic #2 (moon, mess, mice) and #3 (/s/ as in mess, mice), probably that’s a good thing.

Next there was a book with a different word starting with “m” on each page, including words with vowel and consonant digraphs, consonant blends and two syllables, and a total of 15 different sound-spelling relationships, some based on logic #2 (ey as in monkey and money, oo as in moon, ou and se as in mouse) and logic #4 (o as in money, monkey, mop; n as in man, monkey).

This type of book teaches preliterate kids to “read” by looking at first letters, pictures and guessing words. This is reading-like behaviour, but should never be confused with reading. So far only one sound has been taught, so kids aren’t yet equipped to start reading.

Next, the sound /s/ and letter “s” are introduced in much the same format. There is letter identification and matching, spoken word to picture matching (including the three-syllable word “spaghetti”), and a book about “s” with 23 different sound-spelling relationships involving logic #1, #2, #3 and #4.

In the third level I am invited to “Click on the word I” (my italics) and the capital letter “I” appears, first by itself and then with two other capital letters. Then I’m told I’ll be shown “the sound ‘am’ like in ‘clam'” (my italics). So this activity introduces two extra levels of word analysis – rimes (mislabeled sounds) and whole words. Preliterate me wondered why “I” is called a word, when it has only one letter, while “am” is called a sound, when it has two letters.

Next I was told to click on “am”, first by itself and then with distractor items like “xi” and “lu” on bowls of sugar cubes (Reading Eggs has also offered me cakes and marshmallows, so it’s not from the I Quit Sugar brigade).

Then I am asked to “click on the picture which has the am sound in it”, and pictures offered include “dam”, “ham” (which lots of people don’t eat), “lamb” and “stamp” (the latter being especially hard for little kids to discern the “am sound” in, as it’s not at the start or end of the word).

Then I’m shown the sentence “I am Sam” and asked to click on each word, after which the words are scrambled and I am asked to click on them again. Then I’m asked to “complete the dot to dot to make the letter”, though it doesn’t say which letter. It turns out to be a capital I. Preliterate me wonders why they’re now calling it a letter, not a word. 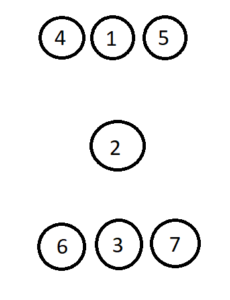 So far, Reading Eggs seems to be a mixture of initial, letter-of-the-week type phonics, picture-guessing and memorising whole words. In the next activity I’m asked to “say each sound and make the word” and shown how to blend “a” and “m” into “am”. This happens once only, and then I’m told “now it’s your turn”, and the visuals repeat, but not the sounds. The same thing happens for the word “Sam”. Then “a” and “s” (/s/) are blended to make “as” pronounced /az/. Nobody explains the sound change.

Next, lower case letter i is given its letter name (“I”), which you’ll recall was earlier taught as the “word” for upper case letter I. I’m asked to find six of them in a grid, but when I get to the grid I’m told to “click on /i/” (the “short” sound).

Sorry, but I really can’t justify spending any more of my time looking at a program that I am not going to recommend to anyone.

If you’d like my recommendations for early literacy iPad apps for little kids, see this blog post. Several of them have versions on other platforms, including Graphogame, Phonics Hero, Nessy and Reading Doctor.

14 thoughts on “Is Reading Eggs all it’s cracked up to be? (boom tish)”