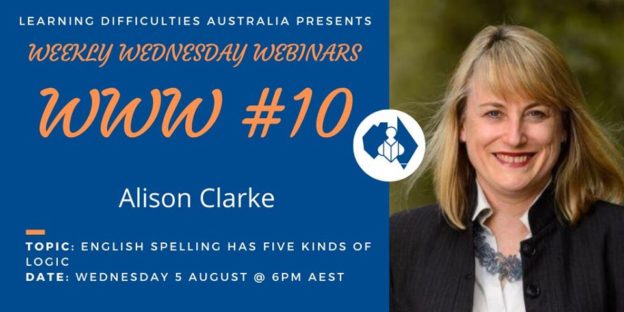 This Wednesday at 6pm AEST I’m presenting Learning Difficulties Australia’s free Weekly Wednesday Webinar (yikes, but I’m back on LDA’s Council so thought I’d better contribute. Also, here in Melbourne we’re going into Stage 4 lockdown, our Jacinda The Warrior Princess hammers ready to smash the virus, so I don’t have an awful lot else on).

Here’s a bit of a preview, to help you decide whether to attend live and ask me Hard Questions in the chat, or perhaps watch it later on Youtube.

The title of the webinar is “English spelling has five kinds of logic”, and I’m hoping it helps teachers and parents better understand and explain our superficially bizarre spelling system. Much of what I’ll say won’t be news to LDAers or other experts, but I hope they find some useful ideas, angles and resources, and maybe a few laughs, and will want to send the link to others.

English spelling makes total sense once you know where it comes from and what it’s for. English is a mishmash of languages, squashed together and warped over time. You can hear some of the historical changes in this punny video, in which (interestingly, for word nerds) Elizabeth I is played by Ben Crystal, son of brilliant UK linguist David Crystal.

Our spelling system is a code that represents speech sounds (phonemes) with letters and letter combinations (graphemes), with special spellings reserved for many meaningful word parts (morphemes).

Sometimes our spellings represent the way words used to be pronounced, in which case I usually tell kids “that’s how people said it in the Olden Days”. I’m not aware of any evidence that lots of etymological detail helps kids much with spelling, but if they’re keen, we look words up in this etymology dictionary.

The phonemes in one’s speech vary slightly depending on accent, and many sounds (ch, j, ay, ie, oe, ue, ou, oy, air and ear) are actually two sounds (I can’t explain this well in print, but will do so in the webinar) but for making-sense-of-spelling purposes in my accent, it’s easiest to divide them into 44 phonemes. Click here for my daggy video listing them.

Once you’re a proficient reader and speller, the idea that words are made of sounds seems obvious. It’s easy to forget that this is not at all obvious to beginners, and thus fail to teach it well (this is called the Curse of Knowledge).

US Professor Mark Seidenberg’s website has videos showing how sounds shmoosh together in words making them hard to discern (plus lots of other interesting stuff), and how each phoneme (an idea in our heads) is produced in more than one way in the mouth (allophones), depending on which other sounds are shmooshing up against it.

It’s also easy to forget how confusable many of our speech sounds are in connected speech. The reason many preschoolers cutely say /t/ instead of /k/ is because they’re both voiceless sounds produced in the same manner (stops), but /t/ is further forward in the mouth. In connected speech, they sound almost identical, as this Great Mask Debate video shows:

Discerning sounds is not just an auditory Thing, it’s also affected by visual information, because when our brains receive conflicting information they try to make sense of it:

Speech sounds must be the starting point for any logical discussion of spelling. The relationships they have to letters I plan to discuss in the webinar are based on the ideas of Dr Diane McGuinness, author of Why Children Can’t Read and What We Can Do About It, a ye oldie bookie (1999) but a goodie. She wrote (and many people now agree, see for example this Spell Links video) that most “sounds of letters” phonics programs are teaching the code backwards, which makes it hard for many children to identify and remember the patterns.

Writing was invented as a way of transcribing talk, so we should be teaching children that “sounds have or represent letters/spellings” (not “letters have sounds”). It’s a seemingly subtle distinction, till you try to explain to someone what the “sound of the letter e” is based on its appearance in the following common words: the, went, we, there, like, one, are, they, have, her, because.

Can’t do it? Me neither, unless you have half an hour. The letter “e” is used in the spellings of many different sounds, but when you start from the letter and a bunch of high-frequency words (as many children are encouraged to do), you end up totally confused.

Sounds are the backbone of our spelling system, but as they are fast, invisible and ephemeral, they too often get short shrift. Five kinds of mapping logic relate sounds to letters:

As Mark Seidenberg and many others have shown, the best way to become a good reader is to have clear, explicit, early instruction on how sounds relate to letters, and then do a large amount of unsupervised, implicit learning, allowing one’s brain to gather data about the statistical regularities of the language. But anyone who’s ever gathered data knows that if you don’t have a clear idea of what you’re gathering, it can all be a bit garbage-in, garbage-out.

Diane McGuinness was onto what we now call Statistical Learning over 20 years ago, and wrote:

Perceptual learning or perceptual memory occurs by a process called ‘probability matching’. The brain is specially adapted to learn visual and auditory patterns automatically by seeing or hearing them a few times. If, and only if, the eye is trained to look at the letter(s) representing one sound, these patterns will be coded without effort. The brain searches for ‘reoccurring regularities’. What is frequently encountered will be remembered. What is very strange or discrepant will be noticed.

“When a system, such as our spelling system, cannot be easily classified, the solution is to organise it according to its probability structure, and teach it by systematic exposure to this structure. This probability structure must be based on how the code was written.” (Why Children Can’t Read and What We Can Do About It, p102-3).

I hope that gives you enough information to decide whether to attend my Wednesday Webinar, without too many spoilers. I promise there’ll be some practical teaching/intervention ideas, including things that work online, in the mix.

« Is Reading Eggs all it’s cracked up to be? (boom tish)

17 thoughts on “English spelling has five kinds of logic”