THRASS: the phonics of Whole Language 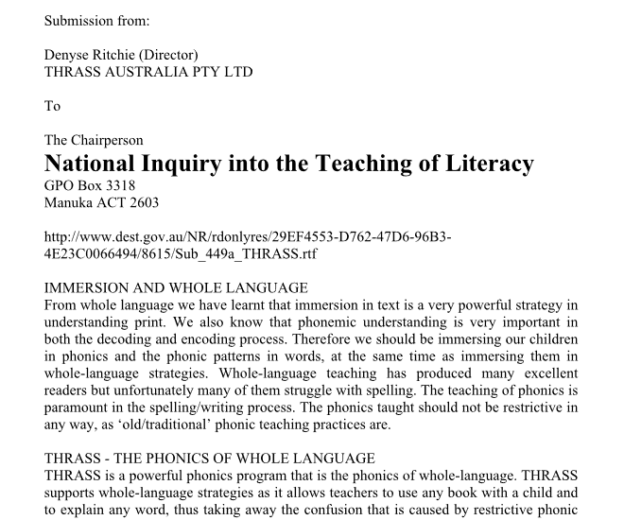 People often ask my opinion of the THRASS (Teaching Handwriting, Reading and Spelling Skills) approach, which has long been used in many Australian schools. Till now I’ve mostly replied that I’m no expert on it, but I’m yet to see robust research evidence supporting it, and aspects of it have never made enough sense to me to invest in the training.

I once worked at a school in a tiny room where lots of THRASS resources gathered dust. Two huge, laminated THRASS wall charts kept overwhelming their blu-tack and falling on my head.

I looked through the resources, but was working mostly with kids with language disorder or intellectual disability, and they would have been overwhelmed by wordy, THRASS-chart-based spelling explanations like this or this (cognitive load!). The THRASS graphemes kit was too big for our room’s tiny table, and lacked example words and some of the graphemes I wanted, so I made my own.

I tried using a THRASS board game but found it a bit incomprehensible. I don’t like teaching program-specific jargon, like “phoneme fists” or “grapheme catch-alls”, and rapping THRASS chart words might be fun, but I’m not sure why else you’d do it.

The kids I work with often get sounds and letter names mixed up, and write “left” as “lft” and “car” as “cR”, so I like to focus on sounds and how we write them, not letter names. Letter names are vital to THRASS. Co-author Denyse Ritchie even commented on my recent blog post, “How can you spell a word without using letter names?… Spelling is identifying sound patterns and writing letter names”. I disagree.

However, I thought of THRASS as a systematic phonics program, so was inclined to give it the benefit of the doubt, and not make the good the enemy of the perfect. I even included it as an example phonics program in my (not in the least perfect) 2012 video How Phonics Got Framed.

Since then, I’ve worked with many struggling readers/spellers attending schools using THRASS. Most have had very poor phonemic awareness, and been very confused about how graphemes represent phonemes.

Sometimes parents showed me mind-bogglingly awful THRASS-based homework activities, like using the chart to generate multiple possible (but, um, incorrect) ways to spell a word e.g. boat, bote, bowt, bot. I have no idea whether these were officially-sanctioned THRASS activities or just a teacher being too creative, but it did make me wonder.

Rather than representing phoneme-grapheme relationships with complex, pre-printed charts like the THRASS one, I like Sound Walls, which children co-construct and refresh over time (click here for a 20-minute Sound Wall summary from PATTAN, or here for a longer video by Dr Mary Dahlgren). Teachers wanting static, readymade charts showing all the main phoneme-grapheme correspondences for use with older kids can find free ones on Debbie Hepplewhite’s Alphabetic Code Charts website, whereas the largest THRASS charts (for the floor) cost $770.

Call that a phonics scope and sequence?

You can download the THRASS scope and sequence here. I expected it to state which sound-letter/spelling relationships, word types and prefixes/suffixes are taught over time, like other explicit, systematic phonics programs.

However, the THRASS scope and sequence contains almost nothing to suggest it’s an explicit, systematic phonics program. It has objectives related to knowledge of the THRASSCHART and THRASSWORDS. There is reading and spelling of “Hotwords”: high-frequency words and words about numbers, days, months, time, seasons, colours, plus a group of “sizzle words” including “friend”, “because”, “people” and “birthday”. The Reading Skills section requires children to read and understand six THRASS books, a set of which are available in Big Book format from the THRASS website for $192.95.

The scope and sequence also has objectives like “articulate own name”, “distinguish between a letter and a drawing”, “identify what defines a word” and “understand and identify the IPA symbols“. THRASS still apparently teaches Aussie kids the old Mitchell and Delbridge IPA vowels, not the current Harrington/Cox/Evans ones (which I must learn sometime, sorry, Libby Clark, I still haven’t).

Only towards the end of the Language Knowledge page in the THRASS Scope and Sequence document does it mention things like plurals, prefixes and suffixes, tense endings (aren’t they suffixes?) and “common syllable groups”, whatever they are.

In the absence of information to the contrary, it seems that in THRASS, any phoneme-grapheme relationship can be taught (or not taught) whenever a teacher chooses.

Research, or the mysterious mimeographs

Google Scholar is widely used by researchers to search for scholarly literature. If you type “THRASS” into Google Scholar, the first item it finds is a 2010 article from the Psychology of Education Review describing a study comparing a Jolly Phonics intervention with a THRASS intervention for 54 school beginners in the UK, though 19 were excluded from the analyses for various reasons. The authors expected that THRASS-instructed children would be better at non-word reading and short-term memory performance, but found they weren’t. This research isn’t mentioned on the Australian THRASS website’s research page.

The second article offered by Google Scholar, again not on the THRASS website’s list, is a 2010 South African study of preservice teacher perceptions of THRASS. It found they felt confident about teaching reading but not spelling or creative writing, and that some teachers liked THRASS, but “the way the programme was introduced to the teachers led to most of them disliking it and not using it to its full potential. The training period was too short and confusing for the students to fully understand THRASS. Many students commented on the disorganisation of the THRASS programme when they went to teach it in the schools. While some students enjoyed using the resources, some of them commented on how expensive these were” (p273).

After that, Google Scholar offers:

I have searched for the other research listed on the THRASS website. The first article, Johnson (1995), seems not to be on the internet, but is referenced in the fourth article, Brooks (2002), which also references another article on the THRASS website list, Matthews (1998). The Brooks (2002) reference list gives the Johnson (1995) and Matthews (1998) details as:

Mimeographs were things we had before photocopiers. At my 1970s primary school, we called ours the Roneo machine. It had purple ink and sometimes if you were good and finished your work quickly, you were allowed to go to the office and Roneo the newsletter.

The Brooks article is actually a series of influential articles called “What works for children with literacy difficulties – the effectiveness of intervention schemes”. The 2016 edition replaces the Johnson (1995) reference with a reference to “unpublished data supplied by Roger Norgate via Alan Davies”, and says of THRASS that “Data from an evaluation in Hampshire in 2005 also provide evidence of a useful gain in reading”, but not who did this evaluation or where to find its report. I don’t know why someone at THRASS doesn’t scan and pdf the Mathews mimeograph and upload it to their website so we can all read it, or why they are still referring to Brooks (2002).

The other items listed on the THRASS website research page are a single case study (Lovegrove 1998), an education department leaflet (DfES 2003), and articles with incomplete citations and no links which the internet seems to have never heard of, except from THRASS. Try putting them into a search engine yourself, perhaps you can find them. Please put any leads or links you find in the comments. Scientific research is supposed to be replicable, but you can’t replicate what you can’t read.

Learning Difficulties Australia stalwart Molly de Lemos recently dug Denyse Ritchie’s submission to the 2005 National Inquiry into the Teaching of Literacy out of her archives for me. In this submission, Denyse succinctly summarises my problem with THRASS, by calling it “The phonics of Whole Language”.

She writes, “THRASS is a powerful phonics program that is the phonics of whole-language. THRASS supports whole language strategies as it allows teachers to use any book with a child and to explain any word, thus taking away the confusion that is caused by restrictive phonics practices.”

Under the heading “Phonics Danger”, her submission goes on, “The problem with ‘old/traditional’ phonic practices is that the strategies presented are very misleading, restrictive and unsustainable and actually set up both the learner and the teacher for failure. The child does not understand the process and the teacher has to revert to terms and inexplicable rules such as ‘sight words’, magic ‘e’ and ‘silent letters’, leading to confusion for teacher and student alike.”

Well, yes, rudimentary, outdated, initial/incidental “sounds of letters” phonics teaching does restrict teaching in this way. However, today’s well-designed synthetic phonics programs systematically teach all the speech sounds and their main spellings plus major affixes incrementally, without the need for complex jargon or rules, and with regard to key factors known to affect learning like cognitive load.

The THRASS website says THRASS assumes “that the learner is regularly helped to use picture, context and spelling-choice cues to read text, suitable books and environmental print.” Which sounds like classic Whole Language to me, but with THRASS providing what US journalist Emily Hanford calls a Phonics Patch.

One of the key benefits claimed for the THRASS chart is that it allows teachers and parents to explain the spelling of any word, any time. Except if you’re out in the playground or the supermarket, sans chart, and are suddenly asked why the word “extinguisher” or “linguini” has a letter U not a letter W.

Spelfabet to the rescue! Take out your smartphone and google “spelfabet u as in extinguisher” or “spelfabet u as in linguini”, and you should get this page with lists of words with this phoneme-grapheme correspondence. Show your small linguistic inquirer that we don’t write “gw” in English, we write “gu” as in “penguin”, “language” and “iguana”, just as we write “qu” not “cw” or “kw”. Add that /k/ and /g/ are a voiced-voiceless pair of otherwise identical sounds produced at the back of the mouth, which probably has something to do with it.

You smashed it! The child will think you know everything about spelling, even without a massive chart held up by about a kilo of blu tack that occasionally falls on your head.

Thanks to Molly De Lemos and Tessa Weadman for help researching this post, and to the  DDOLLers, who always make me think.

27 thoughts on “THRASS: the phonics of Whole Language”