I’ve just watched a great 2016 BBC4 documentary called “B is for book”. It follows a group of London children from their first day at school for a year, and explores how they learn to read.

The kids live on a public housing estate in Hackney, and most speak languages other than English at home.

The film is not currently on the BBC website, but a few people have put it on YouTube. The version I watched is here, and you might like to keep it open in a new tab while you read, so you can quickly find and watch the interesting bits I describe below.

You’ll love all the children, but I was most entranced by a little boy called Stephan. An honest child with a low tolerance for Educrap, he looks and behaves a lot like a little boy I worked with last year, also a twin from public housing inclined to slide under the table.

At 19:42 on the video clock, the two children having the most difficulty learning to read in the film, Maria and Stephan, are asked, “What’s the hardest word you know how to spell?” First, they do this: 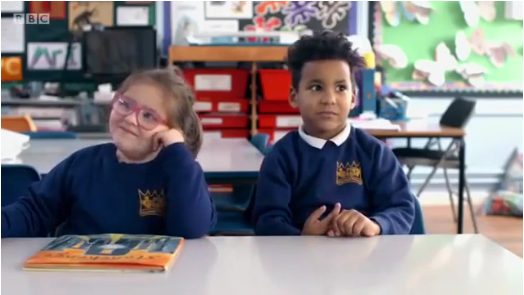 END_OF_DOCUMENT_TOKEN_TO_BE_REPLACED

Decodable books provide the reading practice for phonics lessons. They include sound-letter relationships and word types learners have been taught, plus usually a few high-frequency words with harder spellings needed to make the book make sense, which are also pre-taught.

Decodable books would replace the widely-used predictable/repetitive texts, which encourage children to guess and memorise words, not sound them out.

At the moment, children might be learning about “i” as in “sit” in phonics lessons, but take home a predictable text that might contain words like “find”, “ski”, “shield”, “bird”, “friend” or “view”. Instead of helping kids practise the sound-letter relationships they’ve been taught, their home readers can undermine this teaching.

DVS’s campaign hit the statewide media this weekend, yay, with an article called “Dull, predictable: the problem with books for prep students” in Fairfax newspapers.

END_OF_DOCUMENT_TOKEN_TO_BE_REPLACED

The webinars are presented by Dr Tanya Serry from La Trobe University, and the workshops on which they are based were developed with Professor Pamela Snow, Ms Emina McLean and Assistant Professor Jane McCormack also from La Trobe, and Dr Lorraine Hammond from Edith Cowan University in WA. END_OF_DOCUMENT_TOKEN_TO_BE_REPLACED

A big HUZZAH for the volunteer administrators of Dyslexia Victoria Support, who have won a Victorian Premier’s Volunteer Champions Award for their advocacy on behalf of people dealing with dyslexia.

Heidi Gregory, Carolyn Merrett and Sarah Asome each discovered a lack of high-quality information, and an abundance of snake oil vendors, when searching for help for their own children who struggled to learn to read and spell.

Determined to help others in the same situation, they’ve:

END_OF_DOCUMENT_TOKEN_TO_BE_REPLACED

One of the excellent Dyslexia Victoria Support folk was telling me the other day that she’s planning to write to public libraries asking them to stock decodable books.

This seems to work. All my local Yarra, Darebin and Moreland libraries now have some books with simplified spellings for beginning and/or struggling readers.

The DVS person was thinking about how libraries can help people with dyslexia because she found the following information on the Moreland website:

Of course this information is well-intended, but it’s not well-informed. END_OF_DOCUMENT_TOKEN_TO_BE_REPLACED

An important article by Anne Castles, Kathleen Rastle and Kate Nation summarising the process of learning to read from novice to expert, and seeking to end the “reading wars”, has just been published.

It’s written in plain English and freely available online. It says that phonemic awareness and phonics are vital and central during the early stages of learning to read, but that a lot of other things are involved in becoming a proficient reader. Please read it and share the link around.

Of course, the media’s antennae tend to be tuned to conflict not consensus, so one newspaper reports this with the headline, “Call off the reading wars, phonics wins: study“. The ABC also interviewed one of the authors, Anne Castles, who said a lot of tremendously sensible things as she always does (you can hear her in a radio report here), and also sought comment  from Dr Paul Gardner of Curtin University’s School of Education.

Re ending the “reading wars” he said that, “the problem was with those who advocate phonics as the only approach” and added that “They tend to be people with no classroom experience … from speech pathology, cognitive psychology and think tanks”.

Now, I know not everything is about me, but I reckon I’m probably one of the people he is talking about, since I write a widely-read blog about phonics and am a speech pathologist.

A decodable book is a book for a beginning or struggling reader which contains words she or he can sound out.

In practice this means it contains sound-letter relationships and word types its reader has been taught. It doesn’t include patterns not yet taught.

Decodability thus describes how well a book/text matches its reader’s decoding skills. It gives us a proper, objective way of identifying a just-right book, by ensuring lesson-to-text match. END_OF_DOCUMENT_TOKEN_TO_BE_REPLACED