One of my fun summer activities has been refreshing and editing the free spelling lists on my website (yeah, weird, I know).

I hope teachers find them useful when teaching spelling, I know some already do. Other free spelling lists on the internet tend to focus on what words look like, but not what they sound like, or how they’re constructed, or they tend to reflect UK or US accents, not Australian English. 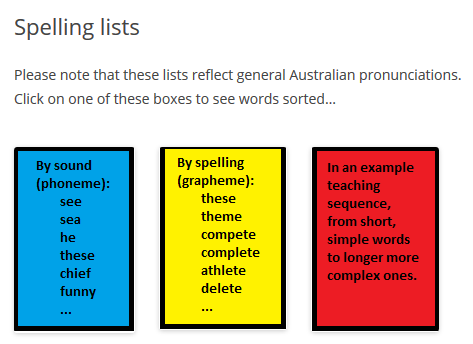 My lists menu allows words to be looked up in three different ways:

My spelling lists can also be quickly accessed via a search engine, for example, I just typed “spelfabet igh as in night” into Google and the first item retrieved was my website’s list of “igh” words.

I can quickly get lists of words containing any sound-spelling pattern this way, but Google stalks us all and knows which websites we visit most, so might need a little training at your end.

For example, the “p as in pup” page used to contain only three-sound words with one-letter spellings like “pot” and “pat” and “top”. Now it has words with four or five sounds, and/or consonant digraphs, like “champ” and “depth” and “plump”, so should be useful with learners still grasping the most basic “p”, and those able to combine it with other consonants.

I’ve also included more lists of long and difficult words built from meaningful word parts (morphemes). Where I don’t yet have a list of words demonstrating a pattern myself, I include links to other websites where you can quickly find or make your own lists, for example using the excellent word-games-nerd website www.morewords.com.

Pronunciation as per the Macquarie Dictionary

My site’s list started out as a sound-to-spelling booklet I compiled years ago after spending (wasting?) another school holidays going through the entire Macquarie Concise Dictionary, sorting words by sound and spelling pattern.

Yup, seriously nerdy, but I needed better lists to use with my own students, and to help me get my head around how our spelling system works. Too often, spelling lists and teaching resources focus on appearances rather than sounds. Typical lists might be:

I wanted lists that started from sounds and worked to spellings, since there are a potentially infinite number of graphemes in English (I think you can even put a silent 3 in your name if you like), but having studied phonology I knew that speech sounds were much more finite, and it made more sense to organise my lists and my thinking around them.

I also wanted to be able to confidently say things like “straight is the only word with the sound ‘ay’ spelt aigh” to my students with Autism Spectrum Disorders and learning difficulties. Their anxiety tends to go down, and their cooperation goes up, when they’re given such clear-cut answers.

Spelling lists should make a point about spelling

The point of teaching spelling is to make it quicker and easier for students to get their ideas onto the page or the screen. This is most efficiently and effectively done through pattern-based word study. Once students have the major patterns nailed, it’s much easier for them to notice and remember the exceptions. They also become better readers.

Non-pattern-based spelling lists, such as high-frequency word lists, lists of students’ own spelling errors, or topic-based vocabulary lists, aren’t much use for teaching spelling. At worst, they can make kids think that English spelling is complicated and random.

Children are entitled to learn about the structure of their language, as well as its meanings. If teachers know about this structure, they can more systematically and successfully teach spelling, even to children with mild intellectual disabilities and significant language disorders.

Only about 4% of English words are truly irregular – words like choir, sure and yacht, but even these contain some sound-letter links that follow a pattern, think of the ch in “school”, the oi in “memoir”, the s in “sugar” and the a in “was”. Even the spelling of “two” makes sense if you know the “w” was once pronounced, and still is in “twin”, “twice”, “twelve” and “twenty”.

Key knowledge needed to make sense of English spelling includes the speech sounds, how each is spelt (usual and unusual spellings), how word position/context affects spelling, meaningful word building blocks (morphemes) and the effect of word origin on spelling.

For teachers who missed out on all this at university, and who don’t have access to a high-quality commercial phonics/spelling program, I hope my spelling lists and website generally help fill this gap, making it easier to teach spelling in a patterned way, and confidently answer kids’ curly spelling questions.

Thanks to my correctrice-réviseuse extraordinaire

After staring at my lists for so long I couldn’t find the mistakes any more, I hired my brainiac friend Kathleen, who edits PhD theses while living mostly in France, to help with finding typos, duplicates, capitalisation errors, words on the wrong lists and other fox paws.

Kathleen also zapped words that might be considered too vulgar for teaching purposes. In linguistics, such value-judgements are severely frowned upon, so I originally had even swear words on my lists, as they’re in the dictionary. Anyway, if you’re working with kids in the juvenile justice system on windy days, vulgar words might be all your students are willing to write (no, I have no actual evidence of a link between high winds and bolshie behaviour).

However, I’ve now deleted even words like “fart” and “pash”, so my lists should be safe for even the youngest and most gently-reared of students. If you need vulgar words, there are lots here.

I’d be very interested in teacher feedback on these lists. What do you think?