Early years teachers around Australia are this week starting to set up their classrooms for the new school year. Many are about to set up alphabet friezes and word walls.

I’m hoping that my new, cheap-and-cheerful embedded picture mnemonics ($10 plus GST) will encourage and help them to instead set up sound friezes or sound walls.

Early last year I commissioned talented, tolerant, patient Melbourne illustrator Cat MacInnes to turn my vague ideas into 46 cute, colour pictures you can print to help kids learn sound-letter relationships. They’re her copyright, so I have a limited number available (get in quick!).

Children’s alphabet friezes typically associate each letter with a picture, ‘a’ with an apple, ‘b’ with a bus’ etc., generally going a bit pear-shaped when they get to X (xylophone? X-ray? fox?).

Research shows that integrating letter shapes into relevant pictures is more effective than just associating letters with a relevant picture. You can watch US expert Dr David Kilpatrick (this year’s LDA Tour speaker, details will be here) talk about this at 18:40 on the video clock here, read about it on p272 of his book, or read relevant research here, here, here and here.

The embedded picture mnemonic on the right below is thus more likely to help learners remember the letter C than the image on the left.

Available sets of embedded picture mnemonics are often designed from a print-to-sound orientation, and thus only represent 23 sounds, because the letters c, k and q represent the same sound, and x represents /k/ plus /s/.

Sometimes these sets include digraphs, but often don’t depict words containing relevant sounds e.g. the digraph ‘sh’ as ‘s for snake’ plus ‘h for horse’, though neither the word ‘snake’ nor ‘horse’ contains the sound /sh/.

To work in a logical, sound-to-print way, it helps to have a visual for each sound. This clearly shows children that we have many more sounds than letters, and often combine letters to represent one sound. Once all the sounds are known, additional spellings for each one can be taught, as well as the ways sounds share spellings (e.g. out/soup/cousin/cough).

Big charts showing all the sounds and their main spellings can overwhelm beginners and strugglers. Embedded picture mnemonics can be used to develop your own charts with children’s involvement, in manageable steps. Example words can be refreshed, to keep them interesting and relevant. Find free wordlists to choose words from here.

Setting up the mnemonics

Laminate and store/display the mnemonics on a wall, noticeboard, window or room divider.

If working with absolute beginners, just start with a few, and add more over time as you teach them. If you don’t have enough space for the A4 version, print them two to a page (A5).

Voiced-voiceless consonant pairs should be kept together. These are:

Knowing that these are pairs helps children understand why they sometimes use each other’s spellings, e.g. the /v/ in ‘of’ and ‘Stephen’, the /z/ in ‘is’, ‘as’, ‘please’ and ‘scissors’.

Organise consonants according to where they’re made in the mouth, e.g.
• Lip sounds at the top of the display,
• Tongue behind teeth sounds in the middle,
• Back-of-the-mouth sounds at the bottom.

Here’s how I’ve set up my consonants, ready for words to be written on them: 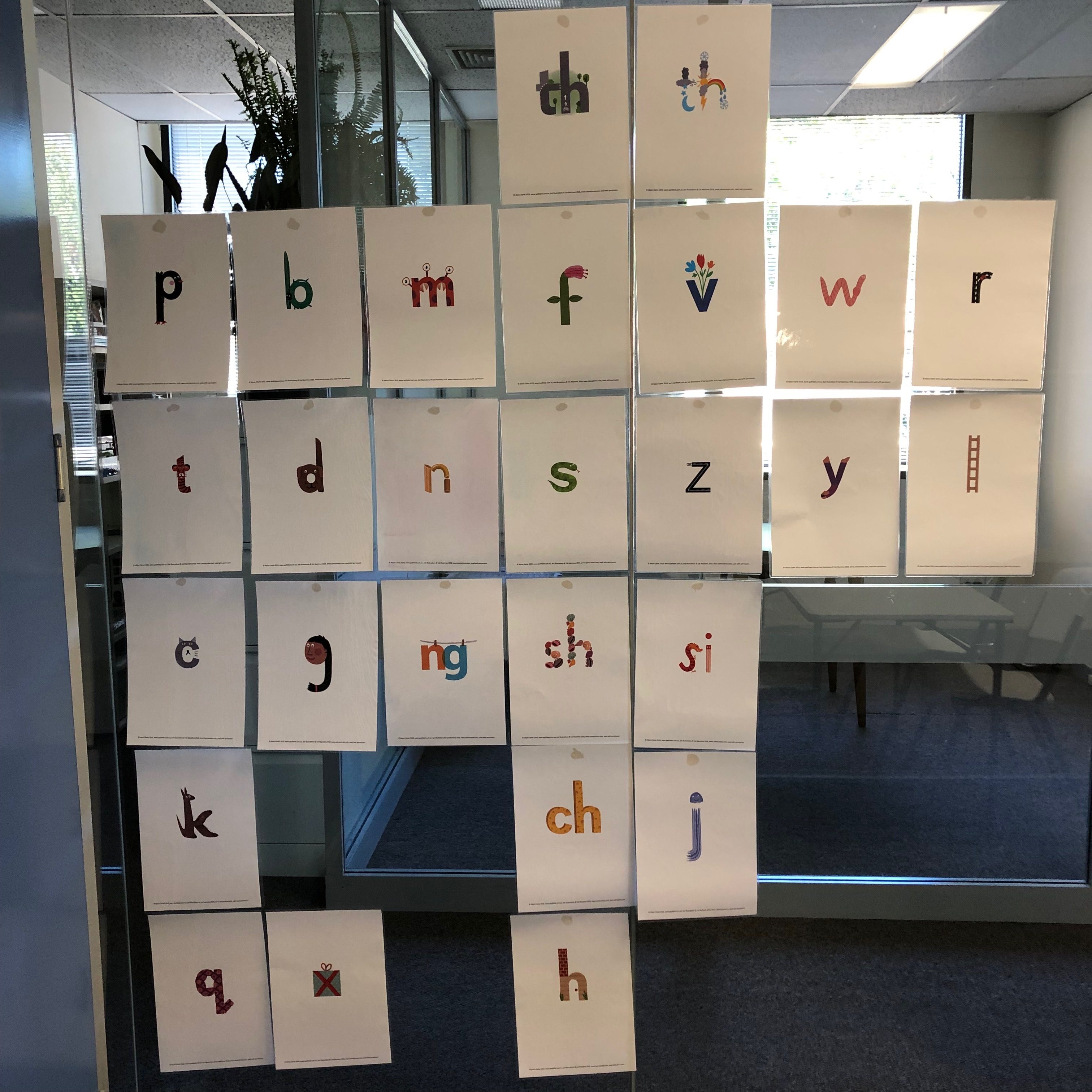 In displaying the vowels, I suggest putting the ‘short’ vowel sounds (which must be followed by a consonant) on the top row, ‘long’ vowels next, and the ‘r-controlled’ vowels and other two stressed vowels at the bottom. When you start teaching about extra and shared spellings, you can point out that the usual spellings for the sounds in the top row can also be used for the second row (e.g. ant/apron, hit/hi, not/no, flush/flu). 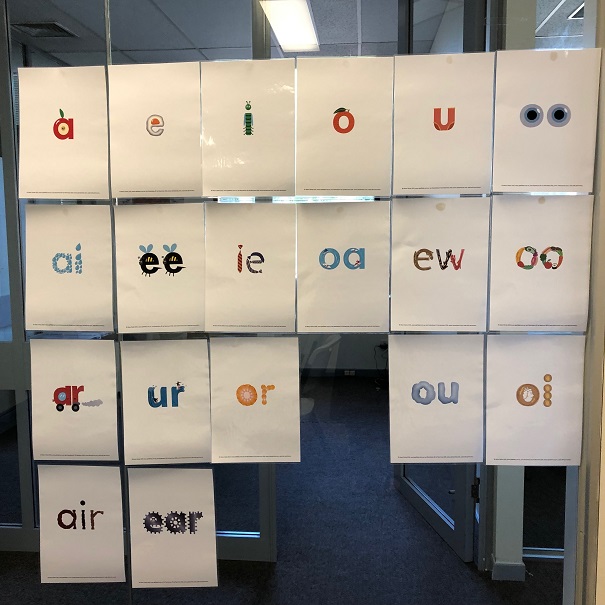 How to use the mnemonics

Words including the sound being taught should be written on the space around the relevant mnemonic using whiteboard marker. Children might first learn four sounds, and then add a couple more to quickly construct many words:

As new sounds are added so that new words are able to be spelt, the words children have consolidated and can spell independently can be erased, to make space for the new words.

Once students have learnt a spelling for each sound, they can start learning its other spellings systematically. For example, if studying the sound /f/, children might brainstorm the words ‘fun’, ‘film’, ‘defend’, ‘off’, ‘fluffy’, ‘cliff’, ‘Sophie’, ‘elephant’, ‘cough’ and ‘laugh’, and these can be grouped under the headings ‘f’, ‘ff’, ‘ph’ and ‘gh’. 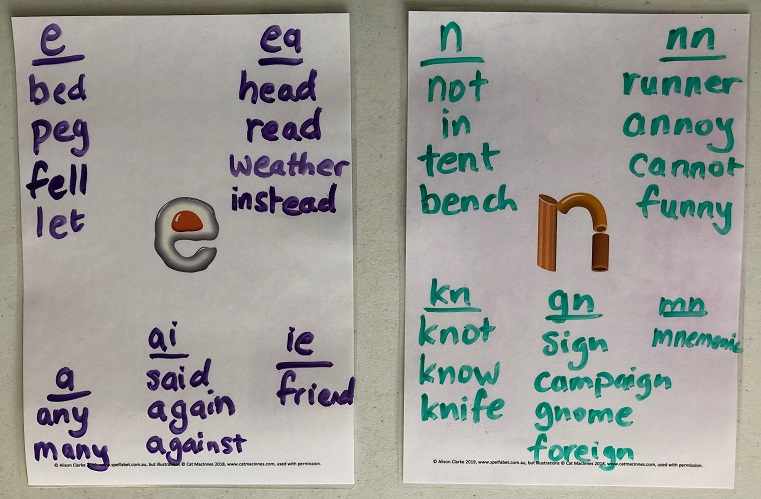 Once there are too many words to write them all in whiteboard marker, lists in smaller print can be attached. Displaying lists of words, rather than a single example word, makes it clear that many spellings have typical locations and neighbours (e.g. ‘ay’ at word endings, ‘igh’ usually before ‘t’).

I hope you like these embedded picture mnemonics, and find them helpful in teaching children about English speech sounds and the complicated way we represent them with letters.

* Except the unstressed vowel, which is stressed when working through words slowly, syllable by syllable, so that it is pronounced a variety of ways based on how it is spelt.